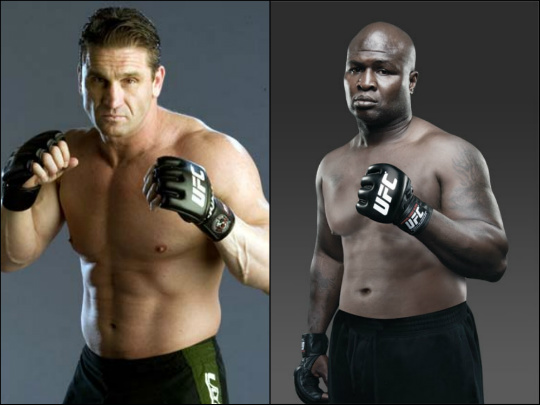 Hold on to your hats MMA and boxing fans.

Current IBA heavyweight champion James “Lights Out” Toney (0-1) is returning to the pro mixed martial arts cage to take on one of the sport’s early pioneers, former King of Pancrase and veteran of the UFC and Pride Fighting Championships, Ken Shamrock (28-15-2).

According to reports, the bout will take place Sept. 23 in El Paso, Texas, and be fought under modified MMA rules in which a 30-second ground rule will be implemented mandating the referee stand both fighters up should they remain on the ground more than 30 seconds.

Toney, age 42, made his MMA debut at UFC 118 in Aug. 2010 against former UFC light heavyweight and heavyweight champion Randy Couture, losing via arm-triangle choke submission 3:19 into round one.

Shamrock, age 47, fought three times in 2010 going 1-2. His most recent bout was against Mike Bourke at “King of the Cage: Platinum” in Nov. 2010. Shamrock sustained an injury early in round one, was unable to continue, thus Bourke was awarded the TKO victory.

Much like Couture in his fight with Toney, Shamrock’s best bet will be to take the fight to the ground. The big difference of course is going to be the 30 second rule. It took Couture over three minutes to submit Toney. Will Shamrock be able to do it within 30 seconds?

On the feet Shamrock will need to be extremely cautious. Out of his 28 wins, only two have come by knockout; once to Kimo Leopoldo in 2004 at UFC 48 and the other to Alexander Otsuka in 2000. Having said that, if it goes to the ground Shamrock has the advantage, and 30 seconds is plenty of time to slap on one of his patented leglocks.