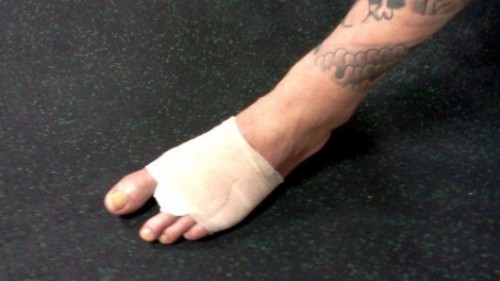 Have you ever had a girlfriend or boyfriend cut off a body part because they loved you so much? Me either. However, if MMA were a woman, she would have to get a restraining order against Neil Melanson for stalking.

On Wednesday, June 13, Melanson, the head grappling coach for Xtreme Couture in Las Vegas, had his left index toe amputated because he was unwilling to take up to a year off from participating in the sport he loves.

Melanson initially broke the toe many years ago in his very first grappling tournament and re-broke it multiple times over the years. Then two summers ago while rolling with a student during class, the student snapped the toe across the big toe while attempting a leglock.

Melanson snapped the toe back into place, wrapped it up and let it go without ever seeking medical attention. The index toe eventually healed, but at an angle overlapping the big toe which made it very painful even to walk.

It was at this point Melanson sought medical attention and was informed by doctors they could put screws in the toe to try and straighten it out but it would keep him out of action for up to a year while the toe properly healed.

Melanson is a big man. He wrestles and rolls with some of the toughest men in the world. And for him to  let a little thing like a toe take him out of action and put him down was not going to happen. He explained:

“It’s really not a big deal to me. It’s just a toe. I guess when you love the sport and you’re committed to it, you don’t let little things like toes get in the way.”

Melanson’s biggest disappointment was not having his toe cut off, but the fact the Nevada clinic that performed the operation would not allow him to keep the toe once it was removed. He commented:

“Me and Randy [Couture] wanted to have it embalmed and make a plaque to hang in the bathroom of the gym. But I would have to apply for a permit. Everybody thinks I kept it; they didn’t know I couldn’t get it done. Me and Randy were pretty excited about that idea.”

See more “Photos of the Day“