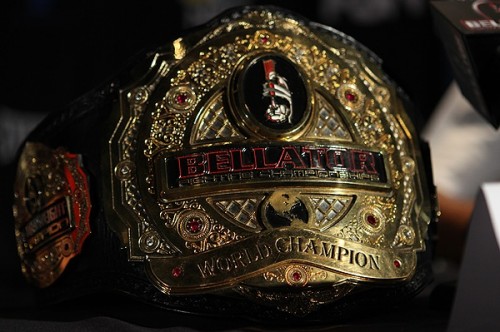 Last week, Bellator changed their start time for this first time this season to avoid the UFC and promptly drew their lowest rating on MTV2. This week, the promotion finds themselves competing with the biggest promotion in the land for press and eyeballs once again.

Bellator 38, which kicks off the promotion’s first light heavyweight tournament, will air live Saturday at 7 p.m. ET on MTV2. UFC Fight Night 24 kicks off on Spike TV at 10 p.m. ET.

The tournament is certainly the weakest field off all the Bellator brackets this season. Former wrestlers Nik Fekete and Raphael Davis are really the only two fighters to look out for, but the tournament also features an M-1 Challenge veteran and a member of the Gracie family.

Daniel Gracie vs. Tim Carpenter
There are two ways to look at this fight. Door number one: Carpenter is mostly a grappler and even pulls guard in most of his fights. Gracie is the better technical grappler, so he should have the upper hand. Door number two: Gracie has nothing but Brazilian jiu-jitsu and even got knocked out by Allan Goes. In Carpenter’s last fight, he defeated Jamal Patterson who is a solid light heavyweight with quality grappling skills, so he should be able to handle Gracie. The second door seems more convincing. Plus, in Bellator, the name fighter loses exactly 76 percent of the time.
Pick =Tim Carpenter
Film Study: Daniel Gracie vs. Wes Sims (I know it’s sad, but I miss the IFL)

Chris Davis vs. Christian M’Pumbu
M’Pumbu only really struggles when his opponent is determined to take the fight to the ground. For example, in his last fight, he dropped a decision to Yoshiyuki Nakanishi who has a very limited skill set and is too small for light heavyweight. I doubt the “Headhunter” will want to take the fight to the ground, so expect M’Pumbu to score a decision here.
Pick = Christian M’Pumbu
Film Study: Christian M’Pumbu vs. Stefan Struve (MMA needs more fighting on huge stages in the Ukraine)

Raphael Davis vs. D.J. Linderman
Clearly, Davis is one of the two favorites in this tournament field. He is a former All-American wrestler at Cal-State Bakersfield and has picked up the submission game extremely well. He should have very little trouble putting “Da Protege” on his back and doing some business on top.
Pick = Raphael Davis
Film Study: Raphael Davis vs. Takanori Kuno (grappling style)

Nik Fekete vs. Richard Hale
Fekete is the other favorite in this tournament. Hale has a nice glossy record, but he has not faced this level of competition. The former Michigan State wrestler should be able to get takedowns and dominate the fight. Let’s hope that Bellator keeps Fekete and Davis away from each other until the finals.
Pick = Nike Fekete
Film Study: Nik Fekete vs. Chris Bostick