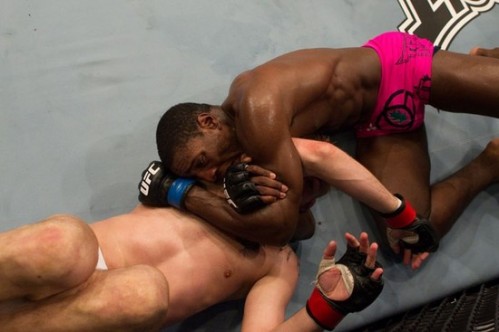 Originally Davis was matched with Matt Hamill, but Hamill was pulled out to replace Thiago Silva against Quinton “Rampage” Jackson, and Brilz was picked to fill in against “Mr. Wonderful.”

Davis claimed the NCAA Division I title at 197 pounds in 2008 to finish his career at Penn State as a four-time All-American. He made his MMA debut in 2008 and has quickly built himself a respectable 8-0 record as a professional.

After going 4-0 on smaller shows, Davis signed with the UFC. So far in the promotion, he has defeated Brian Stann, Alexander Gustafsson, Rodney Wallace and Tim Boetsch.

Brilz also competed as a wrestler in college. He went 63-34 over his four years at Division II University of Nebraska-Omaha.

The North Dakota native made his UFC debut at UFC Fight Night 15. On that night, he scored a knockout victory over Brad Morris. His UFC record currently stands at 3-2. In his last fight, he seemingly scored a decision victory over Antonio Rogerio Nogueira. However, the judges awarded the fight to Nogueira by split decision.

UFC 129 will be the UFC’s first stadium show. After selling out tickets on Feb. 12, the event is expected to break attendance and gate records for North American. In the main event, UFC welterweight champion Georges St-Pierre will defend his belt against Jake Shields.