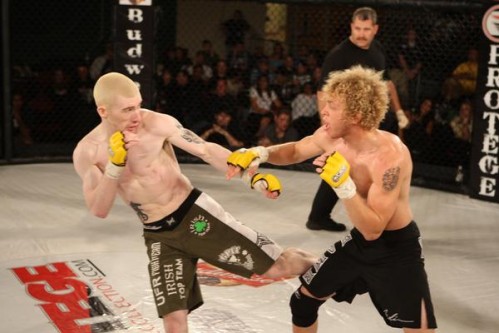 Jonathan Brookins will fight for the first time since winning the 12th season of “The Ultimate Fighter”. Brookins will face Jeremy Stephens at the TUF 13 Finale scheduled for June 4 at the Palms Casino Resort in Las Vegas.

MMAJunkie reported the fight on Wednesday citing “a source sloe to the event.”

On the reality show, Brookins defeated Ran Weathers, Sevak Magakian, Sako Chivitchian and Kyle Watson to earn a spot in the finals. There, he defeated Michael Johnson via unanimous decision. Before signing with the UFC, Brookins fought for the WEC and Bellator. He also holds victories over Yves Jabouin and Luis Palomino.

Stephens has been fighting in the UFC since 2007. He currently holds a 6-5 record in the promotion. In his last fight, he collected “Knockout of the Night” honors after dispatching Marcus Davis in the third round at UFC 124. The “Lil’ Heathen” also holds victories over Cole Miller, Sam Stout and Rafael dos Anjos.

The UFC has yet to officially announce the finale card. However, multiple media outlets have report the event and setting. The card will feature the debut of WEC lightweight champion Anthony Pettis. “Showtime” will meet fan-favorite Clay Guida.