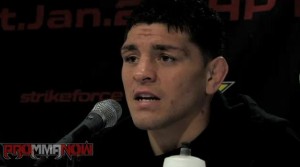 Diaz commented on how he thinks a fight between he and Daley would go and said he’s not impressed with Daley, in particular, his win over Scott Smith. Diaz also voiced his opinion on Smith and what he perceives as Smith’s lack of progression as a fighter.

It is worth noting that Strikeforce CEO Scott Coker said Paul Daley was offered a fight against Nick Diaz but he turned it down, saying he needed a couple of tune up fights first.