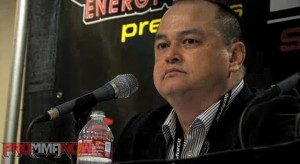 Barnett is currently unable to fight in California due to a failed drug test and resulting issues with the state athletic commission. However, there are several states that will allow Barnett to compete and if need be, that’s where Barnett will fight.

Coker does want Barnett to get his issues with California worked out, but one way or the other, he says, “He [Josh Barnett] will be in our tournament, period.”

1 thought on “Scott Coker: “Josh Barnett will be in our tournament, period””