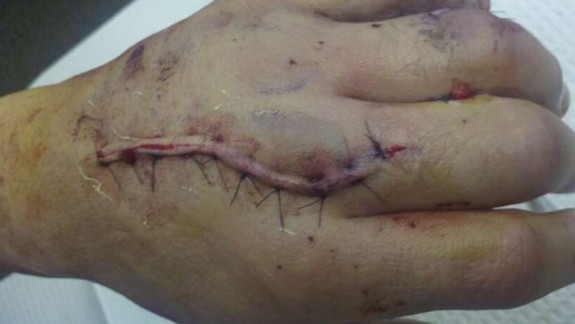 What if we lived in a time when Psychologists would show you photos of various cagefighter injuries in place of the standard Rorschach inkblot test?

When you look at UFC bantamweight champion Dominick Cruz‘s post-operative left hand, what do you see? Personally, I see a funky caterpillar sticking out his tongue… but that’s just me…. I wonder what that means?

The whole hand also sort of resembles a country ham laying on its side. I think that means I’m hungry.

Cruz had to undergo surgery Wednesday after using his hands for hammers against Scott Jorgensen at WEC 53 back in December. See it’s not all fun and games being the Dancing Ninja. There’s a price to pay for fighting like that.

You can’t just continue to go dancing around the cage every fight beating up your opponents right and left and expect to get away with it forever. It’s called karma. It’s the same if a serial killer was walking home late at night and got hit by a truck.

See more Photos of the Day