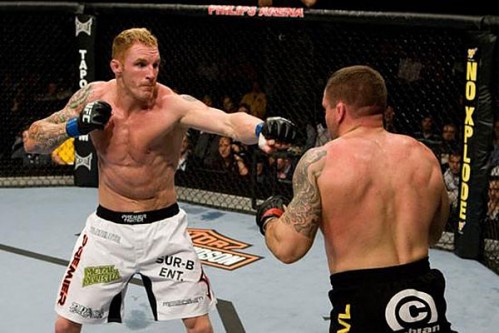 UFC 129, which takes place on April 30 at the Rogers Centre in Toronto, will feature a middleweight contest between Jason MacDonald and Ryan Jensen.

Sportsnet.ca reported the bout on Monday. Other media outlets, such as MMAWeekly, were able to confirm that verbal agreements are in place.

MacDonald is returning to the UFC after suffering a horrific leg break in his last fight against John Salter at UFC 113. Prior to that, he has earned a return to the promotion after picking up three-straight wins over Solomon Hutcherson, Vernon White and Matt Horwich.

The Canadian middleweight burst onto the scene back in 2006 when he scored back-to-back submission victories over reality show veterans Ed Herman and Chris Leben. However, after that he went 3-5 in the promotion and received his release.

Jensen is in the midst of his second stint in the UFC. In his first, he dropped fights to Thales Leites and Demian Maia. During his current run, he is 2-3 with wins coming against Steve Steinbeiss and Jesse Forbes. In his last fight, Court McGee submitted him with an arm-triangle choke at UFC 121.

For their first trip to Toronto, the UFC has stacked the card with Canadian talent. At the top of the card, Georges St. Pierre will defend his welterweight title against former Elite XC and Strikeforce champion Jake Shields.