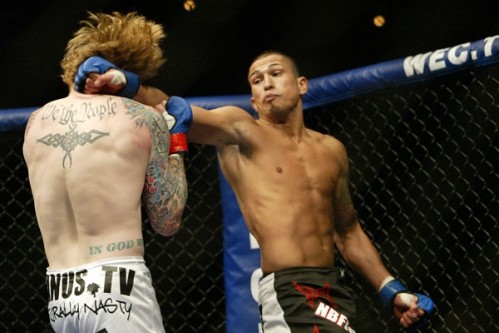 It appears that Anthony Pettis will not wait on the sidelines. Instead of waiting for a lightweight title shot, according to reports, he will take a fight against Clay Guida.

According to a report from Heavy.com, Pettis and Guida will face off some time this spring. The reports says that it will be at either UFC 130 or 131. UFC 130 takes place on May 28, while UFC 131 takes place June 11.

After winning the WEC title on the last-ever WEC show, Pettis earned a shot at the UFC lightweight title. He was supposed to face the winner of the Frankie Edgar vs. Gray Maynard fight at UFC 125. However, now UFC president Dana White has awarded Maynard an immediate rematch.

Pettis earned a shot at the WEC lightweight title after he went 4-1 in the promotion. He picked up wins over Shane Roller, Alex Karalexis and Danny Castillo. In his title fight, he picked up a hard-fought decision over Ben Henderson.

Fan-favorite Guida appears to have his career back on track. After dropping back-to-back fights against Diego Sanchez and Kenny Florian, he has won three in a row. In his last fight, he scored a submission victory over former Pride FC lightweight champion Takanori Gomi.

Kenny Florian’s manager Maki Kawa also tweeted today that his charge would be interested in a bout with Pettis.