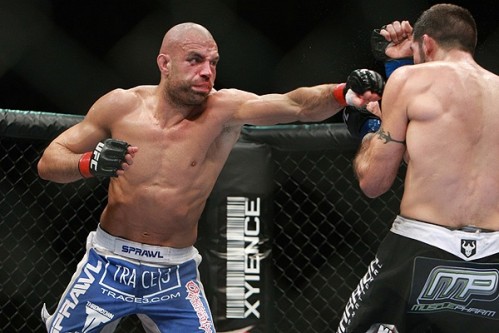 Welterweights James Wilks and Rory MacDonald appear to be headed towards a fight at UFC 129. The card takes place at the Rogers Centre in Toronto on April 30.

Sportsnet.ca was the first media outlet to report the contest.

Wilks rose to prominence in sport after winning the welterweight tournament of the ninth season of “The Ultimate Fighter.” He came to the show with a 5-2 record. In order to reach the finals, Wilks defeated Che Mills and Frank Lester twice. In the final match, he submitted DaMarques Johnson in the first round.

Since winning the reality-show competition Wilks has struggled in the UFC. He is 1-2 since the show with a win coming against Peter Sobotta. In his last fight, he dropped a decision to Claude Patrick.

The 21-year-old MacDonald made his MMA debut when he was only 16. He won his first nine fights and then signed a contract with the UFC. In his promotional debut, he submitted Mike Guymon with an armbar with only 33 seconds left in the first round. In his last fight, he was dominating former WEC champion Carlos Condit, but Condit scored a buzzer-beating knockout with only seven seconds left in the fight.

For the first time, the UFC will host a show in the province of Ontario. Headlining the card is a welterweight title fight. Champion Georges St. Pierre will defend his belt against former Elite XC and Strikeforce champion Jake Shields.