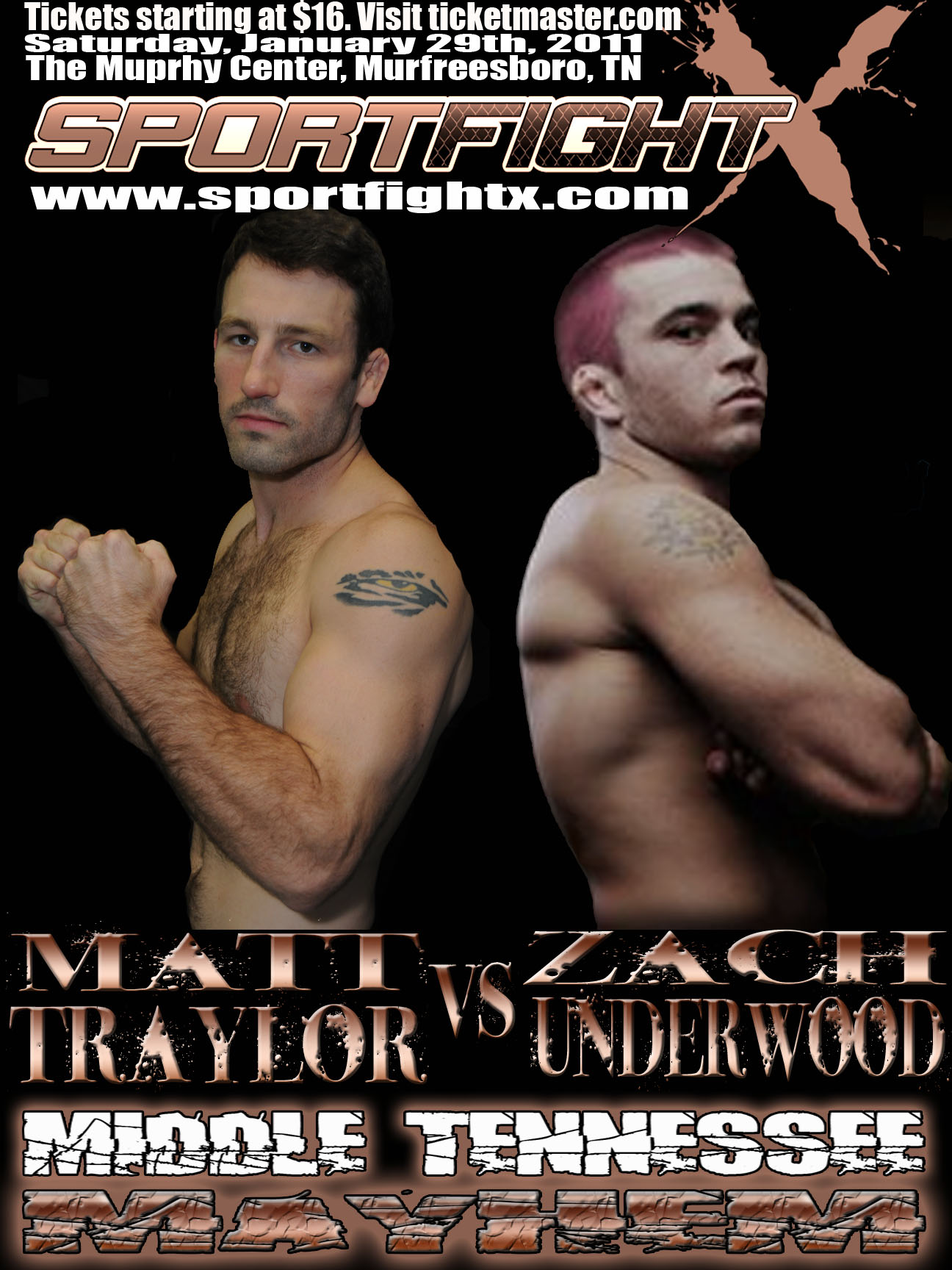 SportFight X, one of the fastest-growing MMA promotions in the United States, will present “Middle Tennessee Mayhem” Saturday, January 29th, live from the Murphy Center in Murfreesboro, Tennessee. The event will feature a Volunteer State lightweight showdown between Union City’s Zach Underwood (7-3) and Knoxville’s own Matt Traylor (5-1). “Middle Tennessee Mayhem” will be shown live on GoFightLive.tv. Tickets start at $16 and can be purchased through Ticketmaster.

Quietly, Zach Underwood has built a reputation as one of the toughest lightweights in the Mid-South. In April 2010 Underwood was offered a chance to compete at welterweight on the undercard at Strikeforce: Nashville “Shields vs. Henderson”. Underwood grinded out a unanimous decision victory over Gladiator Challenge middleweight champ Hunter Worsham showing the world that he is for real and could go up in weight and win a fight for one of the biggest promotions in the country. Underwood is currently ranked the #5 lightweight in Tennessee by AroundTheOctagon.com.

Hard hitting Matt Traylor will be looking for a quick knockout in Murfreesboro. Four of his five pro victories have all come via knockout in the first round. In July it only took Traylor 22 seconds to knock out Justin Blouvet to rack up his fifth straight win. Traylor is currently ranked the #2 lightweight in Tennessee by AroundTheOctagon.com.

Adam Gibbs, the President of SportFight X is excited to have Underwood vs. Traylor headlining the show. “I’m thrilled to have these two tough lightweights from the opposite ends of the state collide at “Middle Tennessee Mayhem”, explained Gibbs “It is going to be a tough fight for Underwood. Traylor has walked through everyone that has been put in front of him and he is no joke. This guy has knocked out some really good fighters and Zach shouldn’t take him lightly. If Zach tries to stand with him we could see Traylor with his hand raised. Everyone knows Underwood is legit and is a big name in the MidSouth but Traylor has knockout power and we expect him to really bring it January 29th. The winner of this fight could very well be considered the best lightweight in Tennessee.”

In addition to Traylor vs. Underwood two heavyweights with bad intentions will collide in the co-main event. Scott Barrett (10-2) will take on former Ultimate Fighter contestant and UFC veteran Mike Wessel (10-3).

Also VH1 Daisy of Love star and Ultimate Fighter season 7 alum Jeremiah “Big Rigg” Riggs will be fighting on the card. Riggs has won four straight after defeating James Sharp at Strikeforce Challengers 12 and will be looking for #5 in Murfreesboro.

You can watch the show Jan. 29 on internet pay per view at www.gofightlive.com.

To learn more about SportFight X or to buy tickets please visit www.sportfightx.com.