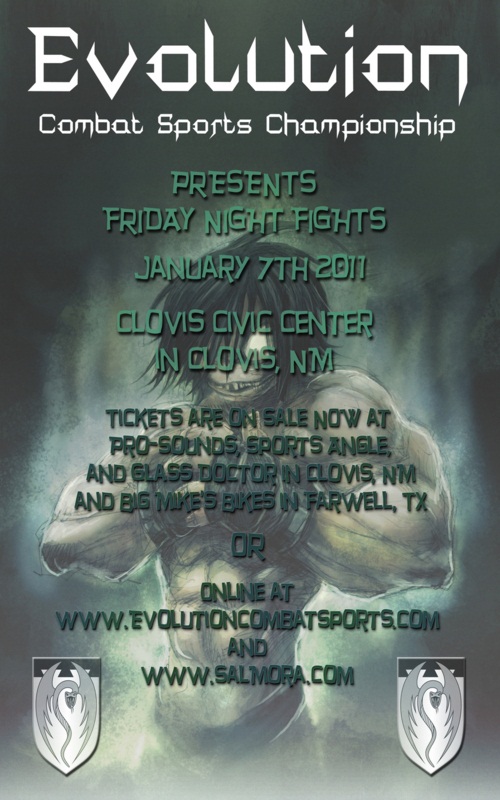 According to Martin Singleterry, president of Evolution Combat Sports Championship, “We did everything in our power to avoid pulling Tyler East from the card, but certain legalities, un-related to KOTC or our event, forced us to do so. We wish East the best and hope to feature him on a future Evolution Combat Sports Championship card. The sudden vacancy on our FRIDAY NIGHT FIGHTS card has opened the door of opportunity for a very promising heavyweight fighter out of New Mexico, Armando ‘Lumberjack’ Quinones.”

Armando “Lumberjack” Quinones, a decorated champion in multiple mixed martial arts disciplines, will make his highly anticipated professional MMA debut on January 7th, when he steps into the cage to face Amarillo fan favorite Josh “The Lunatic” Luna (6-3-0). Although this is Quinones pro MMA debut, he is no stranger to the game and is a champion in his own right. He is a Muay Thai International Champion, West Coast NAGA Champion, and International BJJ Absolute Champion, two-time Four Corner Golden Gloves Champion, and two-time New Mexico Kickboxing Champion. Not only is Quinones a decorated fighter and active student of the game, he is also a licensed trainer and respected coach.

Singleterry went on to say, “Quinones has proven himself in every individual mixed martial arts discipline and has the true potential to become a break out star in this sport. On January 7th we are giving him that opportunity. A main event win over a notable fighter like Luna would open a lot of doors for Quinones in MMA, but he has one hell of a battle ahead of him. Luna is as tough as they come and plans to show no mercy on Friday night. This is just one of many compelling match-ups on the card.”

Christmas is around the corner and tickets to “Evolution Combat Sports Championship Presents: FRIDAY NIGHT FIGHTS” would make a perfect gift for the fight fans in your life. It is also a great way to show support for your local MMA fighters! The “FRIDAY NIGHT FIGHTS” event will showcase dozens of elite amateur and pro fighters from New Mexico and Texas.

Which state will prove to have the most dominant fighters? Fans will find out on January 7th when contenders from New Mexico and Texas go head to head.

“Evolution Combat Sports Championship Presents: FRIDAY NIGHT FIGHTS” will take place on Friday, January 7, 2011, at the Clovis Civic Center in Clovis, New Mexico. Doors open at 6:00pm CT. Fights start at 7:00pm CT. Fans are encouraged to come out early, as seats in each section are first-come, first-served. Tickets are on sale now!

To purchase event tickets on-line please log on to www.EvolutionCombatSports.com or www.salmora.com. Tickets can be purchased in Clovis at the following businesses: Sports Angle, Pro Sound and Glass Doctor. Tickets will also be available at the Clovis Civic Center the night of the event. For more information on Evolution Combat Sports please visit www.evolutioncombatsports.com.

About Evolution Combat Sports Championship:
Evolution Combat Sports Championship, based in Clovis, New Mexico is a subsidiary corporation of its managing partner, Doppelganger, Inc., a company owned and operated by fans of MMA and solely dedicated to the promotion of MMA. Evolution is dedicated to the concept of providing memorable entertainment to the fans, while offering opportunities for MMA athletes to advance their professional or amateur careers. As the name suggests, Evolution is prepared to evolve with the increasingly complex demands set forth in the world of mixed martial arts and entertainment. The fight promotion sets itself apart through progressive thinking and actions, an innovative approach to entertainment, and their reputation of integrity within the MMA community.