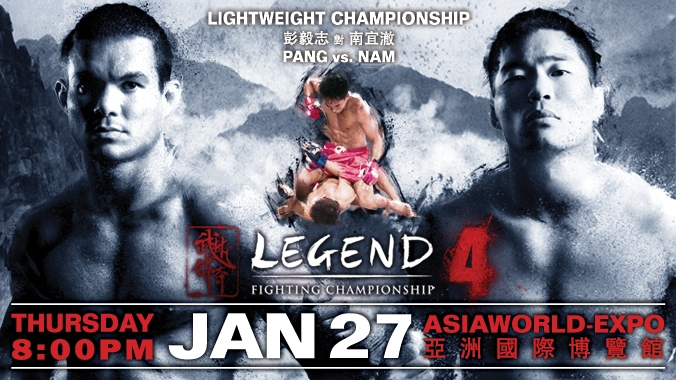 December 22, 2010 (Hong Kong) – Having established itself as the premier MMA promotion dedicated to the brightest talent in the Asia-Pacific region, Hong Kong-based Legend continues to take the lead in developing rising stars from the birthplace of martial arts – China.

Next month, Legend 4 will become the first-ever Chinese MMA promotion to be broadcast across the United States, with the show available on Pay-Per-View on Friday, January 28, starting at 8pm EST. Among the nine scheduled fights are four which feature Chinese fighters, including the Legend debut of top Chinese prospect Wang Sai.

Wang, 24, had a prolific Sanda career before making the transition to MMA in 2009, and trains alongside UFC fighter Zhang Tiequan at China Top Team. Now one of China’s most promising fighters, Wang’s aggressive and exciting style will see him meet New Zealand’s Rod MacSwain, also 24, at Legend 4 to be held in Hong Kong on January 27.

Says Legend co-founder Michael Haskamp: “Wang’s level of natural talent, athletic ability and physical strength are rare not just in MMA fighters, but in professional athletes in general. There’s a real will to win there and an upside that I’m excited to see at Legend 4.”

Chinese athletes are an integral part of Legend – Legends 1-3 featured eight Chinese fighters, including Zhang, who defeated New Zealander Daniel Digby at Legend 2 – his last fight prior to signing with the UFC. A pioneer for Chinese fighters in the United States, Zhang made his WEC debut in September, submitting Pablo Garza at WEC 51, before ending his undefeated streak at 12, losing to Danny Downes in a unanimous decision at WEC 53.

“Martial arts is a big part of Chinese culture, and one of the most exciting parts of our jobs is scouting the best MMA fighters from across China and bringing them to Legend,” Legend co-founder Chris Pollak says. “For US-based MMA fans, Legend really brings something new and different to the table, a brand of MMA you’re not going to see anywhere else so I encourage everyone to tune in on January 28.”

Legend clips, images, news and background are all at www.legendfc.com. Legend 4 will be broadcast in the United States on PPV; Hong Kong, Singapore and Indonesia on KIX; and in China on digital sports channel Power Sports Network.