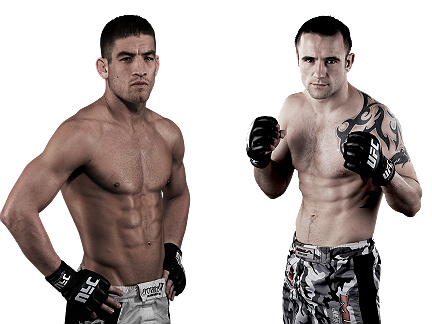 Lightweight fighters Sam “Hands of Stone” Stout and Paul “Relentless” Taylor are both entering UFC 121 coming off losses. Both fighters could very well be on the chopping block here and neither one can afford to lose this fight.

Stout is coming off a very close split decision loss to Jeremy Stephens at UFC 113 back in May. Prior to that he had put together back to back wins over Matt Wiman and Joe Lauzon. However, just before that, it was back to back losses against Terry Etim and Rich Clementi.

All in all, he is 4-5 in his UFC career. Maybe even more telling is the fact that eight out of nine of his UFC bouts have ended in a decision. Any way you look at it, that is not pretty.

After he defeated Lauzon at UFC 108 in January it looked as though Stout could possibly begin to make a run at the title. But even though it was close, the loss to Stephens is still a loss.

The 26-year-old Canadian has got to start finishing some fights if he is ever going to make an impact in the 155 lb. division. The guy is virtually undefeated outside the UFC, but against the top tier talent he has been hit-and-miss.

Taylor is in almost the exact same boat. He only has one loss outside the UFC, but it has been a rocky road inside the Octagon. In fact, he has not even been able to string together two wins in a row, and a loss for him Saturday night, even more so than Stout,will likely earn him his walking papers.

Taylor was scheduled to fight John Gunderson at UFC 112 in April but was forced off the card just one day before the event due to a classic migraine.

Neither Taylor or Stout have finished a fight since 2007. Let’s hope they can at the very least, win or lose, break that trend in this bout.

As the odds suggest, Stout should have the advantage at UFC 121. He should have the edge on the feet, and although Taylor may have the better submission game, do not expect the fight to go to the ground.

These two will likely stand and trade the entire fight and as much as I hate to say it, look for this one to go to the judges, with Stout getting the nod.