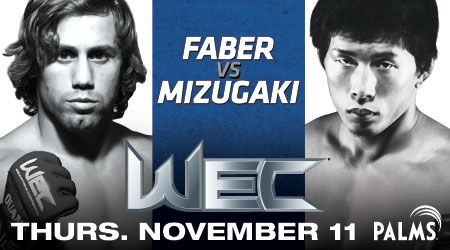 “WEC has a reputation for putting on the best fights in all of MMA,” Harris said. “This card is filled with the fastest, most explosive competitors in our sport and we expect to give fans another awesome night of action on Nov. 11.”

Faber vs. Mizugaki will be televised nationally live on VERSUS beginning at 9:00 p.m. ET/6:00 p.m. PT.  All of the network’s live WEC events are presented in HD and Spanish language SAP where available. For more information and how to find VERSUS in your local viewing area, visit http://www.versus.com/findversus.

Expect a standup war when bantamweights Damacio Page (fighting out of Albuquerque, N.M.) and Eddie Wineland (fighting out of Chesterton, Ind.) collide on Nov. 11 in Las Vegas. A winner of two straight, the 28-year-old Page (12-4) is known for his heavy hands and slick ground game. The Greg Jackson-trained product hopes to propel himself into title contention with a win over the former bantamweight champion next month. Arguably the best pure boxer in the WEC’s 135-pound division, the 26-year-old Wineland (17-6-1) has defeated Manny Tapia, George Roop and Will Campuzano in consecutive fights. The full-time firefighter believes a win over Page at the Palms will lead the way toward a shot at champ Dominick Cruz.

LC Davis (fighting out of Kansas City, Mo.) returns to the WEC cage on Nov. 11 with a renewed sense of motivation. Having won three out of his last four fights, the 28-year-old Davis (16-3) offers that his combination of solid wrestling and crisp boxing makes him a bad matchup for anyone in the featherweight division. He hopes to prove that point when he meets jiu jitsu ace Raphael Assuncao (fighting out of Atlanta, Ga.). Known for his tremendous grappling and polished technique, the Brazilian-born Assuncao (14-3) has fought some of the sport’s best, including Urijah Faber. When he locks horns with Davis in Las Vegas, he expects nothing less than one of the toughest tests of his career.

Knockout artist Anthony Njokuani (fighting out of Las Vegas, Nev.) looks to reinsert himself in the lightweight title picture on Nov. 11 when he meets newcomer Edward Faaloloto (fighting out of Honolulu, HI). Recognized as one of the best Muay Thai strikers in the sport, the 30-year-old Njokuani (13-4) has earned three Knockout of the Night honors in his WEC career. He hopes his fourth comes at the expense of Faaloloto. Training under the tutelage of UFC star Chris Leben in Hawaii, Faaloloto (5-0) is no stranger to intense battles. Thus, he plans to come out swinging against “The Assassin” at the Palms.

Rising lightweight prospects meet when Dustin Poirier (fighting out of Lafayette, La.) takes on Zack Micklewright (fighting out of Davenport, Iowa) in Las Vegas. At just 21 years old, Poirier (7-1) has become one of the divisions “fighters to watch.” Blending speed and power, Poirier, who trains alongside MMA veterans Tim Credeur and Rich Clementi in Louisiana, believes he will be too much for his opponent to handle on Nov. 11. Fighting out of the Miletich Camp in Iowa, the 24-year-old Micklewright (9-2) possesses efficient striking and loves to trade leather with his opponents. With that said, Micklewright will be searching for a brutal knockout victory when the cage door closes in Sin City next month.

Highly-touted bantamweight prospect Michael McDonald (fighting out of Modesto, Calif.) makes his WEC debut in Nov. against Clint Godfrey (fighting out of Rapid City, S.D.). Owning a record of 10-1, including wins over WEC vets Cole Escovedo and Manny Tapia, McDonald has won seven of his fights by way of submission. He’ll be put to the test when he meets Godfrey (11-2), a rugged competitor known for his strength and tenacity.

Division staple Cub Swanson (fighting out of Palm Springs, Calif.) looks to reignite his run toward WEC gold when he meets Mackens Semerzier (fighting out of Virginia Beach, Va.) at The Pearl at the Palms. A smooth jiu jitsu ace who is also one of the best at using angles and feints in the striking game, Swanson (14-4) plans to outclass Semerzier on Nov. 11. The task will be easier said than done. The 29-year-old Semerzier (7-2) is a former Marine who boasts tremendous athleticism and the ability to finish fights.

Featherweights Brandon Visher (fighting out of Maui, Hawaii) and Yves Jabouin (fighting out of Montreal, Quebec, Canada) kick off the action on Nov. 11 in a darkhorse candidate for “Fight of the Night.” A menacing striker and powerful grappler, the 26-year-old Visher (13-1) is best known for his devastating knockout victory over Courtney Buck last year. He’ll be pushed to his limits next month when he meets Jabouin (14-6), a technical kickboxer who trains out of the same gym as UFC welterweight champion Georges St-Pierre.