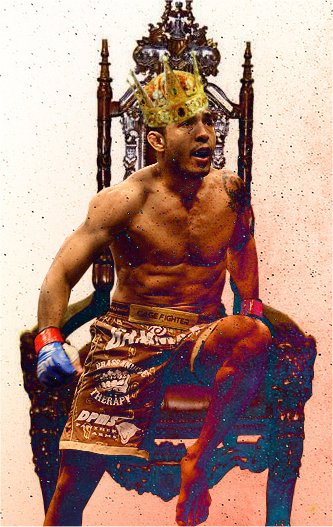 BROOMFIELD, Colo. – Jose Aldo came into his latest title defense against Manny Gamburyan tonight as one of the best pound-for-pound fighters in the world. He took less than two rounds to solidify that status.

Aldo started patiently, waiting for an opening in the defense of Gamburyan, and with under a minute to go in the first stanza, he found it in the form of devastating leg kicks.

In the second round, Aldo opened up the offense, stinging Gamburyan with a right hand before landing a devastating uppercut as Gamburyan shot in for a take down attempt.

Once the fight hit the ground, Aldo bombarded Gamburyan with strikes from behind as Gamburyan covered up trying to survive. After a barrage of strikes, Gamburyan was left unconscious on the mat while Aldo celebrated yet another dominating victory in the WEC.

“In the first round, I was just studying to see what he was going to do,” Aldo said through a translator. “When I came back in the second round, I just put all the work we’ve been doing in the gym into the cage, and I was able to knock him out.”

The win moves Aldo to 18-1 overall and extends his unbeaten streak in the WEC to 8 victories.

Cerrone leaves no doubt the second time around against Varner

Sometimes in MMA, fights often fail to live up to the hype. Somehow with Donald Cerrone and Jamie Varner set to do battle, it seemed almost impossible that this fight would not surpass expectations, and it did not.

The big surprise this time around, was that Donald Cerrone outwrestled Jamie Varner. That’s right, it is not a typo, Cerrone finished the fights with 3 take downs, to Varner’s zero.

Slow starts have plagued Cerrone in the past, but he came out blazing this time around landing a solid knee early that staggered Varner, then just missed with a flying knee that brought the already hyped crowd to a frenzy.

Varner quickly recovered and managed to land some stiff straight punches to the face of Cerrone, but it was the unexpected take downs that Cerrone managed to secure that swung the fight in his favor 2 rounds to none.

The fight slowed in the third frame, but both guys continued to throw everything at each other, making yet another case for “fight of the year,” along with a pretty much guaranteed “fight of the night” award for tonight’s WEC 51 event.

Following the fight, Cerrone (12-3 MMA, 5-3 with 1 NC in the WEC) offered Varner a rematch, which would mark the third fight between the two rivals.

Miguel Torres spent significant time in Canada working on his wrestling prior to his bout with Charlie Valencia. As it turned out, he never needed it.

Torres used his reach and size advantage to frustrate and wear down the usually durable Valencia, and in the second round, the old Miguel Torres showed up.

Torres started the onslaught with a big overhand right, sending Valencia reeling into the cage. Torres followed up with a kick to the head, then landed a big kick to the body of Valencia, dropping him to the mat. Torres poured it on with a relentless ground and pound attack with punches and elbows mixed in for good measure, forcing Valencia to roll and give up his back in a last ditch effort to survive.

The technique only bought him a little more time.

Once on the ground, Torres displayed the ground skills that made him a dominating champion in the WEC, locking up a vicious body triangle, while searching for a rear naked choke submission. Torres wasted little time in locking it in, forcing Valencia to tap out before losing consciousness.

After back-to-back losses, many fans wondered how Torres would respond in his return to the WEC’s cage. The performance answered many of those questions, and it truly appears that Miguel Torres is truly back to his old form.

George Roop is not exactly known as a knockout artist, but he proved that he does know how to take out a Zombie. He didn’t use fire, or any other exotic means to achieve it, but a well placed head kick did the trick nicely.

After an opening round of both guys landing significant kicks and strikes, it seemed that Chan Sung Jung was about to get in the groove, coming forward with more purpose and throwing big combos in the second frame.

Unfortunately for “The Korean Zombie,” Roop used his reach advantage, and a nice jab/right hand combo to set up a laser guided head kick, leaving the Korean fighter unconscious before he even hit the mat.

Leonard Garcia is known for his brawling style and tremendous heart, but tonight it was the technical precision of Mark Hominick that stole the show.

Hominick found a home for his stinging jab early in the fight and as the bout wore on, he repeatedly landed the straighter and cleaner strikes, while controlling the cage throughout the bout.

Garcia managed to stay disciplined and not over commit with his big right hand, but the constant pressure from a stalking Hominick wore down “The Bad Boy,” and by the third and final round, Hominick took control of the fight.