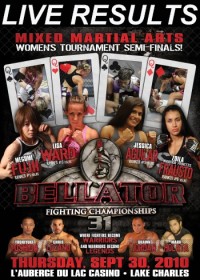 Other fights on this card include heavyweight knockout specialist Dave “Pee Wee” Herman returning to Bellator to take on Polish powerhouse Michal Kita, who will be making his debut for the organization.

Join us tonight as ProMMAnow.com provides live results and play-by-play commentary for Bellator 31.

Round 1 – Yoshida chases Lozano down, they clinch against the cage. Quite a struggle from the clinch. Yoshida gets a trip takedown finally, lands in side control. Yoshida grabs an arm triangle position, goes to half guard. Yoshida lets go of his neck, Lozano gets to his feet. Throws a spinning elbow that hits Yoshida in his back and knocks him down briefly. He gets up and Lozano lands a body kick. He drops Yoshida with a big punch and follows him to the ground attacking. They both get to their feet and clinch up. They separate, Yoshida looks fine as they square up. Lozano rushes in with a big right that scores. Lozano rolls looking for a leg lock but Yoshida gets his back until Lozano spins and ends up on top, he starts landing shots but Yoshida gets his back briefly, Lozano rolls as the bell sounds. Gotta give that round to Lozano 10-9.

Round 2 – Lots of action in that first round. Clinch. Yoshida gets a body lock from the back. Lozano spins and starts landing some shots. Yoshida gets to his feet. Lozano lands a punch and two , three knees to the face. Yoshida shoots, gets a single leg takedown. Lozano warned for landing an elbow. Lozano gets the advantage from side control, lands hammerfists and punches to the body. Yoshida in pure defense at the moment. Lozano gets top position in half guard. He moves to side control, lands some punches to the body, he stands up. Jumps on Yoshida with a D’arce but can’t finish it. Yoshida sweeps him and gets side control with 45 seconds to go. Yoshida goes for an armbar and eats a big right followed by a swarm of punches from Lozano. Lozano locks on a D’arce as the bell sounds. I give that round to Lozano too 10-9.

NOTE: Yoshida has a big mouse under his right eye. Yoshida looks horrible. His eye is swollen shut. Looks like it came from the big knees and punches.His corner has stopped the fight. Lozano just earned his entry into next season’s welterweight tournament.

Round 1 – Zoila working a jab, eats a right. Zoila still using a good jab, gets caught with one or two, but she’s okay and lands a left. Zoila moving side to side. Leg kick and a right from Zoila. Aguilar following her and not scared to stand and trade. Superwoman from Zoila. Left jab from Aguilar, leg kick and a right from Zoila. Aguilar clinches, looking for a takedown. Zoila gives her some knees. Aguilar grabs a single leg but can’t get the takedown, she dows land a few knees to the body, and a foot stomp. Zoila gets some distance and squares up. Big leg kick from Zoila but eats a right counter. Thirty seconds left in the round. Zoila throws some big shots but nothing lands clean. Leg kick from Aguilar. Close round. I give it Zoila 10-9.

NOTES: Aguilar looks completely stunned at the judges decision and the crowd boos.

Round 1 – Leg kick Fujii. Fujii with a right hand. Nice left from Fujii, she eats one too. Fujii lands a clubbing right hand as she chases Ward down, lands a leg kick. Blood coming out of Ward’s nose. Clinch, Fujii gets the takdown and gets full mount. Fujii goes for an armbar but the fence is in the way the first time, tries it again and it’s over just like that. Wanted the rematch cause she says she didn’t tap in the first (she didn’t tap), but Fujii gives it to her quick anyway.