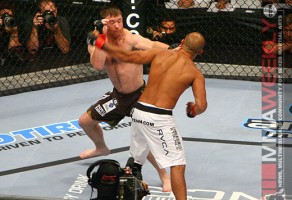 Former two-division UFC champion B.J. Penn (15-7-1) is set to face all-time welterweight great Matt Hughes (45-7) in a rubber match at UFC 123 in Detroit. MMAFIghitng.com’s Ariel Helwani made the announcement via Twitter and CagePotato.com hinted at the possibility earlier in the day.

Penn stunned the MMA world at UFC 46 when he made quick work of a then unstoppable looking Hughes, finishing him off with a first round rear naked choke submission. But Hughes returned the favor at UFC 63, stopping Penn by third round TKO after the Hawaiian started to gas. Now might be the perfect time for a the deciding bout in their series.

Most recently, Penn lost his rematch with lightweight champion Frankie Edgar at UFC 118. Although Penn is still a player in the 155 division, he has stated his preference to get back into the Octagon as soon as possible. Many of the top lightweight contenders already have plans, and a rematch with Kenny Florian,who Penn dominated at UFC 101, would not garner as much interest as a third Penn-Hughes bout.

Hughes, meanwhile, has won three consecutive bouts after dropping three of his previous four. He defeated Renzo Gracie, Matt Serra, and Ricardo Almeida, but prior to that lost in dominant fashion twice to current champ Georges St. Pierre and Thiago Alves.

So a win for Hughes caps a nice end to a great career, and sets up another couple of relevant, big time fights before he decides to retire. And for Penn, a win would reaffirm his potential at 170 if he decides to make a more permanent run at welterweight and boost his drawing potential at 155 as well.