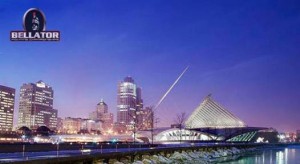 CHICAGO, Ill. (August 27, 2010) — Bellator Fighting Championships officially announced today that the promotion will bring the first Nationally televised, sanctioned MMA event to Wisconsin with Bellator 29, taking place in Milwaukee from the historic Rave-Eagles Ballroom on Sept. 26th.   The Event will be broadcast live on Fox Sports Net with a highlight show running on NBC Network.

“We are thrilled to be the first promotion to bring live, nationally and internationally televised world-class MMA to this beautiful, lake front city,” said Bellator Chairman and CEO Bjorn Rebney.  “The historic Rave-Eagles Ballroom will be a great venue for Wisconsin fans to experience Bellator’s unique brand of MMA action.”

The Rave-Eagles Club was built in 1926 and was named to the National Register of Historic Places on July 29, 1986.  The Rave Eagles Ballroom is the largest venue at the club featuring 25,000 square feet and 1,500 seats which will provide an intimate venue for MMA fans.

The Bellator Season 3 Heavyweight tournament is now down to its final four with undefeated European sensation Damian “The Polish Pitbull” Grabowski squaring off against two-time NCAA wrestling champion Cole “Polar Bear” Konrad in Milwaukee. Russian Judo specialist Alexey Oleinik takes on Neil “Goliath” Grove in the other semi-final heavyweight matchup later this season. The winners will then clash in a Championship matchup to crown Bellator’s first ever Heavyweight Champion.