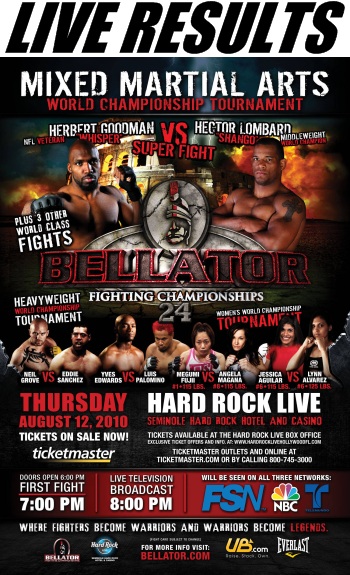 Round 1 – Grove lands a stiff left right out of the gate, Sanchez ran right into it and fell to his back. Grove pounds, Sanchez gets up. Grove gets him back down and is pounding away. Ref separates them, lets Sanchez up. Grove grabs the clinch, lands a knee. Sanchez falls to the ground as Grove pulls him, ref lets him up, but then he stops it, Sanchez looks too bad. TKO win for Grove. Grove advances to semi-finals of the heavyweight tournament.

Round 1 – Megumi is 20-0. Very impressive. Carla is 3-0, all KO’s. Body kick from Fujii. Nice body kick from Fujii. Fujii lands a right hook. Another right from Fujii. Fujii catches a kick, pushes Carla into the cage, they go back to swinging. Carla standing right in there with her. Fujii shoots and Carla stuffs it. Fijii times the shot, pulls guard, but Carla gets to her feet and they end up in a clinch against the fence. Fujii gets a trip takedown but Carla bounces right up. Carla looks good in there. Fujii tries to get her down, ends up on the bottom, and goes for a leg lock. Fujii has her in trouble with a toe hold, Exparza gets out and Fujii ends up in her guard on top. Esparza hanging on tight as Fujii lands some knee to the thighs. Ref stands them up. Esparza looks like a female Drew Fickett. Fujii gets the round 10-9.

Round 2 – Esparza lands a punch at the end of a combo. Fight goes to the ground and Fujii looking for a leg lock, transistions to knee bar, transition again to armbar and Esparza taps out. 21-0 for Fujii. Should be noted Esparza is a late replacement for Angela Magana.

Round 1 – This should be a good fight. Lombard swings big, glances a big right off, comes back swinging again with enormous shots, he lands one and Whisper goes down on one knee, Lombard puts on the heat looking for the finish, boom one more big right and Goodman goes down, two more for good measure and Mr. Goodman is out cold. Enormous power shown by Lombard. A comparison made to Mike Tyson by the commentator. 15 straight wins for Lombard.

Round 1 – Aguilar with a leg kick. Aguilar gets the body lock, then the takedown. Aguilar on top in half guard. Aguilar attempting to pass as Alavarez holds on. Aguilar gets to side control. Aguilar doing no damage, but maintaining control. Alvarez gets full guard. Aguilar gets side mount, then full mount, moves over to looking for an arm triangle but Alvarez gets free momentarily. Aguilar keeps her down and is inside the guard of Alvarez. Aguilar postures up with a big right, then attempts an arm triangle. Aguilar locks it own tight, turns it deep and Alvarez taps out.

Round 1 – Palomino swings, Edwards shoots under, gets a leg and puts him on his back. Edwards inside Palomino’s full guard. Shoulder strikes by Edwards, then body shots and head shots. Edwards has him up against the cage, but Palomino creates some space. Ref calls for action. Palomino in half guard now. Edwards lands a nice elbow or two. Edwards keeping the pressure on with body shots and control. Edwards gets side control. Edwards gets full mount, but Palomino recovers full, then half guard. Nice elbows from Edwards. Edwards being patient in his attack, moves to side control. Palomino escapes, Yves stands as the bell sounds. Edwards gets the round 10-9.

5 thoughts on “Bellator 24 results and play-by-play”