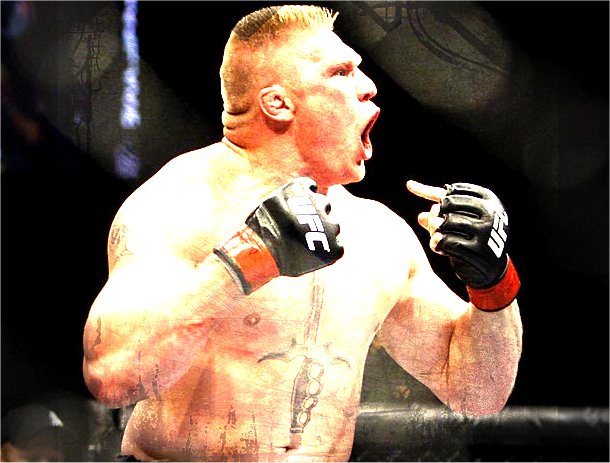 LAS VEGAS –   Many fans questioned whether Lesnar could take a solid punch on the chin and Carwin tested that theory early in the first round.  After getting back to his feet following a takedown by Lesnar, Carwin rocked Lesnar with a staggering uppercut, then followed up with a barrage of punches that sent Lesnar reeling against the cage.

The onslaught would continue as Lesnar tried to cover up, with Carwin gaining top position and landing flush elbows and big right hands that opened up the face of Lesnar.  It appeared to be over, as the referee was very close to stopping the action several times, but a bloodied Lesnar somehow survived.

Lesnar eventually made his way to his feet and rode out the rest of the round pressing Carwin against the cage until the bell sounded on the first.

Having never been past the first round in his previous 12 fights, Carwin looked visibly tired at the start of the second.  Lesnar immediately shot in and took the fight to the ground, and once on the mat, Lesnar isolated the left arm of Carwin, then transitioned from full mount to side control looking to lock up the arm-triangle.

Carwin remained relaxed, using his strength to create just enough space to breathe, but once Lesnar adjusted his weight, the pressure forced Carwin to tap just seconds before he lost consciousness.

Lesnar was more humble in his post-fight interview than in the past, having survived a life-threatening illness outside of the cage, and a near loss inside the Octagon.

Leben is now the iron man of the UFC.  Taking his second fight in as many weeks against the very tough Akiyama, Leben came in and showed his evolution as a mixed martial artist.

Leben had trouble with Akiyama’s speed early, and Akiyama used his judo to get the fight to the ground in the first.  Leben stayed active on his back going for an armbar, but after a scramble, it was Akiyama that transitioned to an armbar of his own, using a mounted triangle to isolate the arm of Leben.

Leben escaped, worked to his feet, then landed a big left hand, before getting taken down at the bell.

The second was a battle for survival, as Leben landed 3 big left hands that hurt by Akiyama.  Akiyama however, stayed in the pocket and landed a huge counter right hand that froze Leben in his tracks.

Leben looked out on his feet but kept throwing big combinations as he staggered forward looking to finish.  Both guys would survive to see the final frame, and so the battle raged on.

Leben came out in the third round looking to take control of the fight, but it was Akiyama that took advantage of a slip, gaining top control on Leben as he looked to finish the fight from the top.  Despite Leben being on his back, he was the more active fighter, throwing a barrage of elbows and punches from the bottom.

Leben worked to get off of his back with time running out, then went for a triangle that he locked in with just under 30 seconds to go in the bout.  Leben finally stopped punching long enough to grab the head of Akiyama to finish the triangle, forcing “Sexyama” to tap.

Matt Brown started fast and strong, muscling Lytle all around the Octagon, landing straight punches and crisp kicks.  The clinch game of Brown kept Lytle from standing and throwing big punches, and once the fight hit the ground, Brown locked up a near-fight ending d’arce choke on Lytle late in the first round.

Lytle found his rhythm in the second, landing a stiff uppercut that stunned Brown.  Brown dropped for the takedown and got caught in a guillotine attempt, and looked to be in trouble.

Lytle gave up on the submission, but quickly made his way to mount.   Lytle then transitioned to sidemount, stepped over the head of Brown and locked up a mounted triangle.

Once the triangle was locked in, Brown was fighting with one arm, and Lytle worked on the isolated arm against the defenseless Brown.  With no arm to tap with, Brown was forced to verbally tap.  It was yet another impressive performance by the fight-night bonus king, Chris Lytle.

Who would have expected anything different from Stephan Bonnar?  Bonnar brought his trademark brawling style into this bout with Soszynski as both guys traded huge power shots, and mixed in knees, and kicks for good measure.  Soszynski started stronger early in the first, opening up a cut under the eye of Bonnar with a big right hand.

Once the blood started flowing, the old Bonnar emerged.  Both guys stood in the pocket and exchanged huge looping punches, and each time it looked like one of the fighters would finally take control of the bout, the other would land with a big shot, continuing the slugfest.

Bonnar started to take control mid-way through the second, landing a crunching knee to the face of Sosznyski, then took the fight to the ground for some ground and pound.  After a scramble, Soszynski managed to get to his feet, but Bonnar locked up the plum clinch and landed a head snapping knee that dropped Soszynski.

Bonnar followed Soszynski to the ground and landed a barrage of left hands to the turtled Soszynski, forcing the referee to step in and stop the fight.  The win halts a 3-fight losing streak for Bonnar, who moves to 12-7 (6-6 UFC) with the victory.

Both Sotiropoulos and Pellegrino came into this bout as accomplished grapplers with dangerous ground games, but it was the boxing of Sotiropoulos that dominated the action throughout the bout.

Sotiropoulos connected repeatedly with his left hook,  but it was a straight left hand that dropped “The Batman” in the first round.  Pellegrino survived, but was beaten to the punch throughout the bout, and he quickly found himself down two rounds to none heading into the final frame.

Pellegrino took the fight to the ground in the third, but was neutralized by the very offensive and aggressive guard of Sotiropoulos, who used a very effective rubber guard to control the posture of Pellegrino, taking little to no damage in the exchanges.

Pellegrino made a push late and connected with a big knee and a right hand that dropped Sotiropoulos at the bell, but it was too little too late.  Sotiropoulos was awarded the unanimous decision victory, and his sixth consecutive win inside the Octagon.