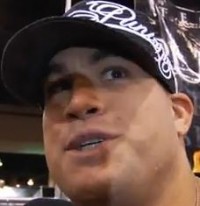 LAS VEGAS, Nev. – Danny Acosta caught up with “Huntington Beach Bad Boy” Tito Ortiz (15-7-1 MMA, 15-6-1 UFC) at the UFC Fan Expo to talk to the former UFC light heavyweight champ about his recent neck surgery and when fans can expect to see him back in action.

Ortiz says it has been six weeks since the surgery and he is at about 40% right now. His doctor just cleared him for weight training and boxing, and he plans to slowly get back into training and get his weight back up.

Ortiz, who has served as coach through most of this season’s “The Ultimate Fighter”, appreciates all the fans that have stuck by him through thick and thin but has a message for the haters, “Suck it!”

Ortiz is 1-3-1 in his last five fights and has lost his last two bouts. He has only fought once a year for the last three years, and has not fought any yet in 2010. Ortiz’s last victory was in 2006 against Ken Shamrock.