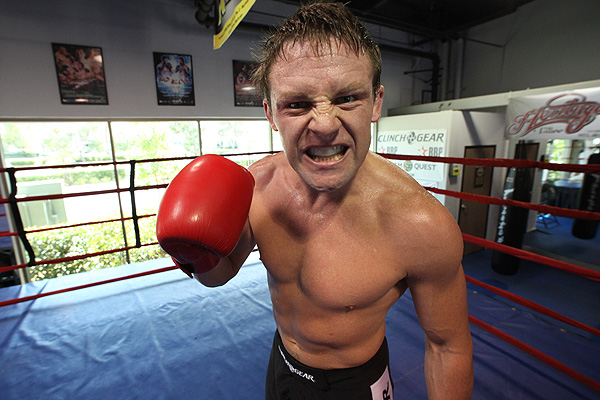 This weekend is one of the biggest MMA weekends in recent memory. I decided to bring back the weekend picks. There are several quality events, and they are events you can see.

Weekend Television Schedule
Beat the Streets on TheMat.com Thursday at 6:15 EST
Bellator Fighting Championships on Fox Sports Net Thursday at 8:00 EST
Shine Fights 3 on Pay Per View Saturday 9:00 EST
King of the Cage Honor on HDNet on Friday at 10:00 EST

Beat The Streets
This is a wrestling event that is taking place aboard an aircraft carrier. USA Wrestling will be streaming the event live for free at their website, themat.com, at 6:15 pm EST.

Spenser Mango vs. Ellis Coleman
If the WEC needs another reason to add the 125-pound division, they should take a look at Spenser Mango. The 2008 Olympian defines “athletic and explosive” and is probably one of the country’s best chances to medal in 2012. Coleman should present a stiff test since he normally competes a few divisions up at 145.5 pounds.
Pick = Spenser Mango

Ben Askren vs. Moza Fay
Ben Askren, the MMA and wrestling crossover star, will return to the mats for this quality match up. Fay was a two-time All-American at Northern Iowa and has been impressive during this international season. Askren should be able to dominate this one on the ground, and win by scoring a fall with his patented move: “the assassin.”
Pick = Ben Askren

Jake Herbert vs. David Bertolino
Last summer Herbert won a silver medal at the World Championships. Since then, he has looked even better. He recently placed first at the U.S. Open and is a virtual lock for the 2010 world team. Bertolino, an Iowa State, alumnus also performed well at the Open taking third place.
Pick = Jake Herbert

Bellator Fighting Championships 18
Hector Lombard vs. Jay Silva
In perhaps the least shocking news of the year, Paulo Filho was forced out of this bout due to visa issues. Now the BFC champion takes on Jay Silva, and the fight is much less interesting. Silva looks like a titan and posses extraordinary striking ability. However, he has been easily controlled on the ground by a variety of opponents. Lombard will have no trouble getting the fight to the ground and doing some damage there.
Pick = Hector Lombard

Joe Warren vs. Georgi Karakhanyan
A lot of the excitement surrounding Warren came from the fact that he beat Chase Beebe and Norifumi “Kid” Yamamoto in his first two fights. Now those victories do not look nearly as impressive, and his submission defense has not come along like many hoped. With that being said he should be able to win this one. Karakhanyan does most of his best work on the feet. That is not a luxury he will have when he takes on Warren.
Pick = Joe Warren

Patricio “Pitbull” Freire vs. Wilson Reis
Freire is pretty much the hottest prospect coming out of Brazil right now. He showed a little bit of his talent with a quick submission in the first round of the tournament. However, in the second round, Reis might have his number. For most of Reis’ MMA career he has wanted to get on top and work from there. This was a problem since his wrestling was weak. In his last fight he dominated Shad Lierly, who many thoght would be the superior wrestler. Look for Reis to get on top and maintain position for the victory. It won’t be pretty, but it will get Reis to the finals.
Pick = Wilson Reis

ADFC Battle of Champions
Rameau Thierry Sokoudjou vs. Dave Herman
Herman has shown in the past that he has trouble with opponents when he does not blow them out of the water right away. Sokoudjou will be able to withstand an early flurry, so it seems like Herman will be in trouble. However, Sokoudjou looked dreadful in his last fight, and I do not trust him to come ready on short notice. Look for Herman to pick up the biggest win of his young career.
Pick = Dave Herman

Jeff Monson vs. Shamil Abdurahimov
Picking against Monson is like rooting for the Lebron James, real fans just don’t do it. Abdurahimov wins most of his fights by bullying his opponents to the ground. This is a not game plan that will work against the Snowman. Look for Monson to get the better of the wrestling and lock in a north-south choke or a neck crank of some sort.
Pick = Jeff Monson

Marcos Oliveira vs. Johan Romming
This fight is pretty much a mismatch. Oliveira should be able to win the fight whichever way he wants. Look for Oliveira to take the fight to the ground and finish the fight by submission.
Pick = Marcos Oliveira

Neil Wain vs. Przemyslaw Mysiala
I have been using Neil Wain as the prime example of everything that is wrong with the heavyweight division in MMA. Not only is he not a good fighter, but also he is a very poor athlete. Mysiala is a much smaller fighter, but he will easily defeat Wain. This fight should be evidence that there is no need for the crusierweight division.
Pick = Przemyslaw Mysiala

Shine Fights 3 Worlds Collide
Din Thomas vs. Ricardo Mayorga
You saw UFC 1 right? The only question is, will Mayorga come into the cage rocking one glove.
Pick = Din Thomas (my actually prediction is that this fight will not happen, and it has been since day one)

Murilo “Ninja” Rua vs. David Heath
Heath likes to come out and brawl. It normally makes for an exciting fight, but it also leads to a lot of losses. Rua has been on quite the skid recently, but he should be able to pick Heath apart on the feet or dominate on the ground.
Pick = Murilo “Ninja” Rua

Nick Thompson vs. Eduardo Pamplona
Thompson will be the bigger and more well rounded fighter. Pamplona’s striking game is based around landing big strikes. However, Thompson should be able to keep the distance with his jab and take another victory over a superior striker – see the Paul Daley fight.
Pick = Nick Thompson

Braulio Estima vs. Rick Hawn
My obsession with grappling prospect coming into MMA is being satiated with this fight. The reigning ADCC absolute champion will take on a 2004 Judo Olympian. Hawn has the experience in this fight, and probably should be the favorite. However, Estima’s performance at the last ADCC was so amazingly, so I am swayed.
Pick = Braulio Estima

Alexandre Ferreira vs. Jamal Patterson
Patterson wins fights by implementing his ground game. However, in this fight Ferreira really should be the better grappler. This fight could turn into a nasty ground battle or an unskilled striking festival. Either way I am going with Ferreira.
Pick = Alexandre Ferreira

Luiz Azeredo vs. Charles “Krazy Horse” Bennett
Karzy Horse, or whatever he wants to call himself now, only really has an advantage when he is sneaking attacking his teammate with a metal pipe. He will come out swinging and find himself caught in a submission hold.
Pick = Luiz Azeredo

King of the Cage – Honor
Darril Schoonover vs. Nick Gaston
This fight is a battle of reality show fighters. Schoonover actually fought real fighters on his reality show, so I am going with him. However, even with the loss Gaston can still plunk bullies on MTV.
Pick = Darrill Schoonover

Quinn Mulhern vs. Joey Gorzynskj
Remember when everyone thought Rich Celementi would own Quinn Mulhern on the ground? That seems like years ago now. Mulhern has quickly developed into one of the brightest stars in KOTC. Look for his to throw some rubber guard and score a submission victory.
Pick = Quinn Mulhern

Tony Lopez vs. Mike Kyle
Mike Kyle has shown he has the skills to excel on this level. I fully expect him to come out and plunk Lopez early in the fight. However, Lopez will probably submit Kyle if they go to the ground.
Pick = Mike Kyle

Angelo Sanchez vs. Donald Sanchez
These two fought not very long ago. Angelo won by imposing his superior grappling game. I see no reason why this does not happen yet again. KOTC should avoid a third fight between the two, because Sanchez vs. Sanchez is really confusing.
Pick = Angelo Sanchez

Abel Cullum vs. Josh Montoya
Cullum has already been to the big show. On this level, he should dominate all of his opponents easily. Look for Cullum to score an impressive submission victory and continue to plump up his resume for the WEC.
Pick = Abel Cullum