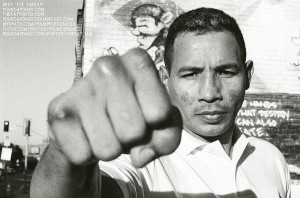 NEW YORK, NY (May 12, 2010) – Ricardo Mayorga, Shine Fights, and the city of Fayetteville are eagerly awaiting Saturday’s MMA showdown between Ricardo Mayorga and Din Thomas at the Crown Coliseum. “Worlds Collide: MAYORGA VS THOMAS” will be broadcast via PPV on cable and satellite in the United States and Canada. The event will be in High Definition and it will be available in both English and Spanish (where available). The MMA showdown will be distributed live on Pay Per View beginning at 9 p.m. ET/PT by MultiVision Media, Inc. on Saturday, May 15 at 9:00 PM ET/6:00 PM PT. There is a 30 minute countdown show prior to the live event at 8:30 PM ET/5:30 PM PT. The suggested retail price for the MMA showdown is $29.95.

Among those most excited about Saturday’s event is Shine Fights CEO Devin Price, who laughs off Don King’s injunction threats to stop the bout. “MMA fans are going to see an electrifying evening of fighting. I have faith in the American justice system, and I believe justice will prevail. When one operates within the rules and regulations, one has nothing to worry about. As far as King goes, it is just his usual smoke-and-mirrors. He shoots his mouth off about an injunction to try and sway the media’s perception, and then waits until the last minute to file in hopes of affecting the success of the promotion. I know the difference between MMA and boxing–and so does Don King. The members of the media, and both MMA and boxing fans, can clearly see that Don King is up to his ‘trickerations.’ This is a wonderful and exciting promotion Shine Fights has put together for both MMA and boxing fans, and I look forward to Saturday, May 15th.”

Mayorga is a huge MMA fan who has been dreaming of the day when he will “defeat, with pleasure, a top MMA fighter,” and he promises that Saturday, May 15th will be that day.

He is also has some choice words for Don King: “Don King cannot stop this fight because I have only signed contracts with Don having to do with my boxing career. This is ridiculous, because Don knows he has not fought me in 18 months and a fighter makes his living and supports his family based on fighting. I love MMA, and this is a wonderful opportunity for me and my family. He does not give me fights and now wants to try to stop me from fighting…that’s a shame. I have not had any other means to make a living other than fighting. No one can live on air alone. I have been fortunate to have enjoyed being a world champion in boxing, and now have a great opportunity in MMA. Aside from my passion for MMA, I support my family…my children, my mother.”