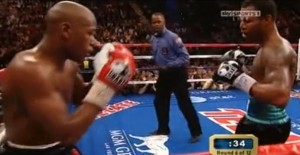 Floyd Mayweather Jr. fought Shane Mosley at the MGM Grand Garden Arena in Las Vegas, Nev. on Saturday, May 1, 2010. ProMMAnow.com did the play-by-play and we scored rounds one and two for Mosley, although the first round was close.

The most exciting round was round two, especially if you were rooting for Mosley. He hit Mayweather harder than he’s been hit in a long long time, actually wobbling the undefeated fighter. It appeared for a moment we might actually see Mayweather get knocked out.

Mayweather was younger, faster, his jabs were much harder, and his punches much tighter and crisper. The defensive Mayweather showed he could stand toe to toe with a strong welterweight and beat him in a real fight. As the fight ended, after twelve rounds, Mayweather was not even breathing hard.

What this fight did was make people want to see Mayweather vs. Pacquiao even more. If fans were hungry for the fight before, now they are starving for it.