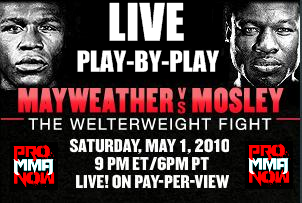 Without a major MMA card going on this weekend, ProMMAnow.com will be focusing on the Floyd Mayweather (40-0) vs. Shane Mosley (46-5-1) boxing match going on tonight at the MGM Grand Garden Arena in Las Vegas, Nev. The action airs live on Pay-Per-View, and we will be providing live round-by-round updates throughout the fight. Mayweather weighed in at 146 lbs. and Mosley weighed in at 147 lbs.

Will Mosley be able to solve the Mayweather puzzle, that so far, no one has been able to? Will the 38-year-old Mosley’s power and experience be too much for the undefeated 33-year-old Mayweather? Stick with us and find out.

An interesting note about this fight is the much talked about “Olympic-style” drug testing that was implemented for the first time in a professional boxing match. It was announced on tonight’s broadcast that the fighters were tested in excess of eight times by the U.S. Anti-Doping Agency.

Officials collected blood and urine samples and random unannounced intervals leading up to the bout. If this type of drug testing were used in all sports it would wipe out the problem of athletes using illegal performance enhancing substances.

(EDITOR’S NOTE:  We’ve been having incredibly bad thunderstorms here and tornadoes for the past two days straight. If the power goes out, the play-by-play of course will be interrupted. I apologize beforehand if this happens.)

Round 1 – Here we go. They tie up and Shane jabs the body. Again. Straight left by Shane. Jabs to the body by Shane, the tie up. Shane’s glove touches the canvas after an exchange. They rule it a slip. Shane scores with a left and Mayweather returns it. Nice one two by Floyd. No punches for the last ten seconds as they try to fake each other out. Shane 10-9.

Round 2 – Shane with a straight left. Floyd with a overhand right. Big right by Shane rocks Floyd, and again with a shot. Mayweather ties him up. Floyd lands another right after the break. Mosley keeps firing, huge right by Mosley. Mayweather’s knees buckle but he’ ties up and tries to put on the poker face. Crowd chanting Mosley. Huge right to the body by Mosley. Mayweather lands a nice right. Right by Floyd. Shane 10-9. Commentators say that’s the hardest Floyd has been hit in a very long long time.

Round 3 – Floyd almost got KO’d that last round. Floyd lands a couple of nice shots. Nice left by Floyd. Left jab by Shane. Floyd more of the aggressor at the start of this round. He settles down a little now, lands a left. Left, right by Mayweather. Floyd has adjusted to Shane’s initial advantage. Floyd 10-9.

Round 4 – Mayweather lands a few jabs. Being more patient now. Nice right hand by Floyd. Shane misses with a right as Floyd slips it. Floyd with a left then a right. Floyd landing more shots. Mosley falling into Floyd’s fight now. Shane landed practically nothing. Floyd 10-9.

Round 5 – Mosley being hesitant, not releasing. Left jab for Floyd, misses with a right. Mosley trying to box with Floyd and is losing the speed and accuracy battle. Nice left by Floyd. Floyd’s confidence is back noticeably, lands a right. Floyd 10-9.

Round 7 – Mosley’s jabs are very light and Mayweather’s jabs have much more pop on them. Right to the body by Mosley. Left jab to the body by Mosley, then a huge right by Mayweather lands on the chin of Mosley. Floyd landed clearly the most significant shot in that round. Mosley’s corner tells him he looks like he’s fading. Floyd 10-9.

Round 8 – Ref gives Mosley a hard warning for manhandling Mayweather. The fighters are talking and Mayweather lands a big right. They both are talking. Right hand by Mayweather lands solid again. Another right by Floyd lands and the sweat flies. Left hand by Mosley to the head then body. Commentators say Shane’s spirit looks gone and said Mayweather looked at them and smiled. Floyd 10-9.

Round 9 – Mayweather starts with a few quick jabs. Floyd plays peek a boo and gets the best of Mosley. Right to the body by Mosley and Mayweather fires back. Mayweather not dancing around, not using much footwork, just standing in front of Mosley now and beating him to the punch every time basically. Floyd lands a one two, Mosley fires back and that’s when Floyd uses footwork to get out of Mosley’s last ounce of aggression for the round. Floyd 10-9.

Round 10 – Mosley landed 3 out of 45 punches in the last round according to Compubox. Right hand by Mosley, and Floyd fires back, and again by both. Body shot by Mayweather. Nice uppercut by Floyd. Right hook by Mayweather. Big right by Mayweather, and a stiff left and right rocks Mosley’s head. Floyd 10-9.

Round 12 – Mayweather is not even breathing hard. Mosley looks like he’s on his last leg. Right to the body then to the head by Mayweather. Left hook by Mayweather rocks Mosley. They tie up, body shot by both guys. Right hand by Mosley. Left jab by Mayweather. Mosley stalking. Uppercut by Mayweather. 45 seconds left. Mayweather lands an uppercut out of the clinch. With ten seconds left they both throw a few shots but Mayweather proved he is younger, faster, stronger, better, more technical. Commentators say it wasn’t even a tough gym workout for Floyd. ProMMAnow.com scores the final round 10-9 and the fight 118-110 for Mayweather.

16 thoughts on “Floyd Mayweather vs. Shane Mosley results and play-by-play”