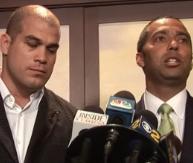 Ortiz’s lawyer, Chip Matthews, said Jameson has been battling an addiction to the prescription painkiller Oxycontin now for over a year and she had a relapse Monday morning.

Matthews denied any wrongdoing on the part of Ortiz and said he never laid a hand on Jameson. Ortiz was visibly upset during the press conference and walked out when a reporter asked about the couple’s future and if they were going to try and work it out.