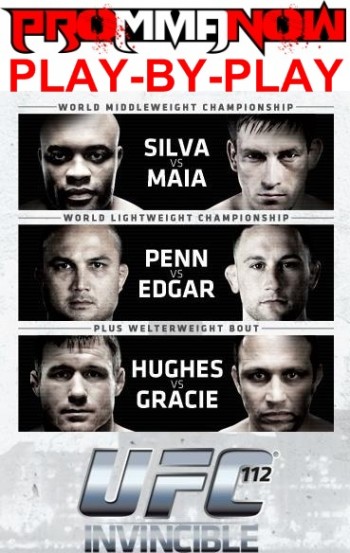 ABU DHABI – “UFC 112: Invincible” takes place today at the newly built Concert Arena on Yas Island in the United Arab Emirates. It is the UFC’s first ever event in the Middle East, and will air live on pay-per-view beginning at 12:00 a.m. ET/9:00 a.m. PT.

Live result updates for the UFC 112 preliminary bouts will begin at approximately 10:15 a.m. ET/7 a.m. PT. Following the event, the “UFC 112: Invincible” post-fight press conference will be available for viewing in our UFC Room sometime this afternoon.

Round 2 – Munoz gets caught with a hot on the way in, then a huge knee rocks him, he goes to the ground and Grove takes his back. Munoz escapes and fires off with punches as Grove is on his back. Munoz now in Grove’s guard. Big punch to the face by Munoz, then body shots over and over and over. Vicious ground and pound. Grove gets him back in full guard. Munoz’s ground and pound is sick. He stands up, Grove still on his back and Munoz comes in with the flurry, he connects, Grove covers up, he’s hurt and the ref has to step in. Great come back for Munoz.

Round 1 – The round was a kickboxing match. Nothing significant landed.

Round 2 – The round was spent completely on the feet again. Hughes landed some good leg kicks. Lots of punches thrown but few landed.

Round 3 – Nice leg kick by Hughes. His leg kicks have been the best part of the fight so far, and he lands another. Hughes lands a body shot and another leg kick. Nice right hand by Hughes scores. Another leg kick from Hughes, followed by some punches, then clinch. Hughes lets go and fires off several punches that rock Gracie. For some reason he’s not keeping on him though. He rocked Gracie, then lands an uppercut that rocks Gracie. Hughes drops Gracie with a leg kick. Hughes has to help him up. Hughes drops him once more with a leg kick. He somehow gets up, but slowly. Hughes drops Gracie with a punch, but wills himself up. Hughes punishes the leg, then finishes Gracie off with punches, Gracie drops to the ground and Herb Dean steps in. Wow! Matt Hughes the kickboxer!!

Notes: Sorry about missing the play by play for the first two rounds and the first two fights of the main card. I actually fell back to sleep waiting for this damn early card!

Round 1 – Leg kick by Edgar. He’s in and out and looking quick. Another big leg kick by Edgar. Both guys land a jab. Another left jab by B.J. Another nice jab by B.J. Edgar is showing good movement, side to side, in and out. However, nothing landing much, except a nice leg kick once again. Uppercut from B.J. He grabs the back of Edgar’s head and lands several uppercuts. Edgar tries to get inside but eats some lefts. Once again B.J. scores nicely. A left hook by B.J. scores. Then a jab from B.J. B.J. tosses Edgar aside from a clinch. B.J. has a little mouse and slight cut under one eye. ProMMAnow.com scorew the round 10-9 for Penn.

Round 2 –  Leg kick misses by Edgar. Nice left scores for Penn. Edgar goes for a takedown but gets stuffed. Leg kick checked by Penn. Edgar continues with his footwork and moves all around. He eats a left. B.J. being more patient this round instead of chasing him everywhere. Edgar tries another takedown but lets it go. Penn lands a nice lightning fast combo as Edgar comes in. Edgar feints and Penn beats him up with a few shots. Edgar continues his movement all around. Leg kick by Edgar. Edgar somehow took Penn down for a split second, it was almost like a trip. ProMMAnow.com scores the round 10-9 for Penn.

Round 3 – Right hand by Penn catches him behind the ear. Edgar fires back but eats about three. Penn continues to use the jab probably better than anyone. Edgar scores with a left hook, and continues his dance. Nice left by Penn. Edgar is probably the best boxer Penn has faced. Nice one-two from Penn. Edgar scores with a left hook. Edgar goes for a takedown attempt, then as Penn moves away, hits him with a body kick. Interesting. Edgar goes for another takedown and eats a knee. Penn swings big but misses. Penn checks a kick and the bell sounds. ProMMAnow.com scores the round 10-9 for Penn.

Round 4 – Both of Penn’s eyes have mouses under them. Edgar’s face looks the better of the two from what I could tell. Penn’s corner told him to take it to the ground. Edgar moving in, Penn keeping him back with jabs. Edgar goes for a takedown, gets stuffed. Left hand by Penn, then a leg kick scores for Edgar. Head kick skims Penn’s head. Edgar looks very fresh and fast. Edgar shoots, stuffed. Edgar showing great movement, refusing to stay in the pocket. Nice counter right and left jab from Penn. Edgar attempts another takedown to no avail. Left hook by Penn counter. Bell sounds as Edgar lands a hook. ProMMAnow.com scores the round 10-9 for Edgar.

Round 5 – If you have to beat the champ, Edgar is not doing it, although he is doing better than anyone else has. Edgar scores a real takedown this time, but Penn bounces right up. Leg kick by Penn. Edgar follows with his own. Right hand by Penn. 2:50 left in the fight. Right hand by Edgar scores nicely. Edgar goes for a takedown twice and gets stuffed both times. Left hook by Edgar. Leg kick by Edgar. Edgar is definitely winning the dancing contest. Penn has slowed down and Edgar looks just as fresh says Rogan. Right hand and a knee to the body by Penn. ProMMAnow.com scores the round 10-9 for Edgar and the fight 49-46 for B.J. Penn.

Notes: Edgar says, “The belt doesn’t fit so maybe I am a 45 pounder.” We get no comments from Penn. Wow, I surely scored this one “wrong”. I’ll blame it on just waking up and being a huge Penn fan. I just can’t believe this. Penn just didn’t pour it on. He was wearing a knee sleeve on one leg. Who knows, but I call for an immediate rematch.

One thing I just noticed I hate. When a champ like B.J. Penn just lost his title, and they usher the guys out of the cage and the new fight is ready to go in a matter of five minutes. Come on man… you can’t just gloss over something as significant as that. This was a sad fight for me, I have to say.

Notes: Silva gets on his knees and bows to the four corners after they come to the front. They just said Silva will face GSP at 170lbs. if he wins tonight. How the hell can Silva make 170??? That’s too much damn weight differentiation for him. Make GSP go up.

Round 1 – Silva just waiting, he looks very relaxed. Knee stomp by Silva. Maia feinting and Silva spins him around with a leg kick. Silva dancing back and forth, spinning back kick lands to the belly. Silva ducks down to the ground like a sprinter. Silva lands a right hand and Maia goes to the ground briefly. He gets up and Silva smacks a leg kcik. Leg kick scores for Silva. Jumpinng right hand scores for Silva. Silva lands a flying knee and scores. Maia falls to the ground. Maia does the butt scoot. Silva drops his hands and waits. He starts coming at Maia with incredible feints and makes Maia flinch like a baby. OMG. ProMMAnow.com scores the fight an immediate win for Silva based on pure style. I wish I could explain in words what we just witnessed.

Round 2 – Silva drops his hands and waits. He lands a right hand and Maia is “running terrified” says Rogan. Silva drops him with a  leg kick. Rogan says this is a “showcase of Anderson’s talent.” Leg kick by Silva scores. Maia shoots, gets stuffed. Maia shoots, nothing. Maia dives in again. Silva tells him to come on, getting very very animated like never before. Silva is acting crazy, crazy. How will White react to this? He could get either instantly fired or get a raise. Silva is toying with him making an absolute mockery of him. Silva is screaming at him and landing pin point punches. Maia keeps backing up. This is a mix between a Broadway show (dare I say WWE) and MMA.

Round 3 – Maia throws a shot and Silva mockingly acts hurt. Leg kick by Silva. Again. Crowd cheers for Silva. Silva waits. Leg kick by Silva. Again. The crowd boos ad the inactivity. Maia lands a left hand. Silva goes for a thigh punch. Maia swings a left. Silva lands a body kick and a right hand. Maia goes for a takedown and gets thrown to the side. Maia’s face has blood trickling down. No activity for 10 seconds as the bell sounds. The crowd boos. White does not like hearing boos in his main event.

Round 4 – Left hand scores for Maia. Big boos coming now. Maia swings big, misses. Front kick by Silva lands. Rogan says he doesn’t know what Anderson is doing here. The crowd has turned on Silva and is cheering for Maia. Leg kick by Silva. The crowd now chants GSP. Silva continues to dance around, not attacking. Ref calls for action. Maia throws up his hands to bring it on, Silva does the same thing. Fans are going to go NUTS about this. Don’t be surprised if Silva gets fired if he doesn’t finish this fight.

Round 5 – Dana White walked over to Ed Soares between rounds and looks VERY upset. Maia’s eye is almost swollen shut. Rogan thinks he has a broken nose. Maia shoots, misses. Maia swings and misses. Rogan says Maia probably blew his nose that was broken between rounds and caused the eye to shut. Maia stuns Silva with punches. Silva finally escapes but Maia looked to stun him. Silva ducks a punch, slips it. Rogan thinks Silva is tired and doesn’t want to show it. Spinning back kick scores for Silva. Ref calls for action and crowd boos. Maia gets a leg, can’t get Silva down. 1:45 left in the fight. Leg stomp by Siilva as he dances around. Silva swings and Maia swings. Silva continues to dance and dance. The ref warns Silva he’s going to take a point. Maia misses with a punch. Silva backs up from Maia and won’t engage. Look for a fucking shit storm to come out of this my friends.

Notes: Silva bows to Maia and tries to show him respect now, but few probably buy it. Silva says he doesn’t know what got into him tonight, Maia surprised him with some punches, he wasn’t as humble as he should have been, and he guarantees it won’t happen next time. Haven’t we heard this before?

For once in my life I feel sorry for Dana White. He does not like to be embarrassed and who can blame him when he’s trying to expand the sport into new countries and something like this happens. These guys built a stadium for the UFC and this is how they are rewarded by the fighter who is supposed to be the “best in the world.”