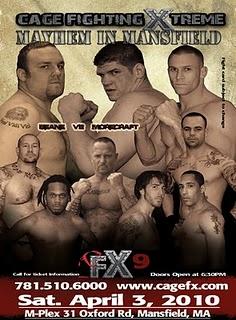 MANSFIELD, Mass – The CageFX April 3, 2010 Mayhem in Mansfield Show will be the promotion’s 9th event and features a stacked card (subject to change) of 17 professional fights. The main event features Heavyweights Lee Beane (6-0, Wai Kru) and Christian Morecraft (5-0, CCFA) in a battle for the CFX belt. Both men are undefeated and have heavy KO percentages, so this fight is sure to be full of fireworks.

Chuck O’Neil and Chip Moraza-Pollard will square off at 170 pounds in the co-main event.  O’Neil, from Lauzon’s, is the more experienced fighter with a 6-3-0 record, but Moraza-Pollard (CCFA) is undefeated thus far (4-0) in his MMA career.

Two additional bouts will take place on the card at the 185-pound weight class. MMA of Southern Maine’s (MMA of SM) Glenn Reaves faces Scott Lockhart of South Shore Sport Fighting (SSSF) in one of the 185-pound clashes. Reaves gave Shawn Baker all he could handle in this clip from the last CageFX show in Mansfield: http://www.youtube.com/watch?v=KgR8afS3tRk

Aside from the incredible main event, there are two other heavyweight bouts slated for this card. Boston Brazilian’s Ken Avery takes on Eclectic MMA’s Shawn Galano in the first battle of the big boys, and Bishops’ Chris Bagge and Independent Mark Hoxie are set to fight in the other heavyweight match.

There is one 205-pound bout scheduled. Bishops’ Mark Griffin will meet Randy Row (Lion’s Den) in that contest. Wai Kru’s Shawn Baker will also be back in action, facing Jason Greenberg (Gilett’s MMA) at 190 pounds.

Fellow Wai Kru warrior, Steve Dunn, will be featured in one of two 175-pound fights on the card. He will hope to continue his winning ways against Independent Vaughn Lahr. BKJA’S Lionel Young meets Abe Pitrowski of Burill’s BJJ in the other 175-pound battle.

Only one 170-pound bout other than the co-main event is listed. Wai Kru fighter Aaron MacKinnon faces Eclectic MMA’s Eric Hurd in that match.

Three 145-pound bouts and a 135-pound contest round out the card, which is subject to change.

John Brooks (MMA of SM) and Mike Polvere (SSSF), Andrew Robertson (MMA of SM) and Greg Mendes Snake Pit), and Johnny Kim (BKJA) and Rob Costa (WCMMA) all square off at 145-pounds, while Robbie Leroux (Wai Kru) and Independent Doug Sonier are set to do battle at 135.

The full card is of course subject to change at any time for any reason.

The event is the latest scheduled in a long line of blockbuster shows put on by Cage Fighting Xtreme. Promoter Linda Shields, her husband and CageFX Matchmaker Gary Forman, and their stellar team of fighters and support personnel. This promotion is setting itself apart from other outfits by putting their people first. A recent partnership with Rock Station WAAF (97.7, 107.3) is the latest in a long line of incredible accomplishments and great strides, including Shields being named 2009’s Action Martial Arts Magazine’s Woman of the Year in January:

1 thought on “CageFX brings Mayhem to Mansfield on April 3”