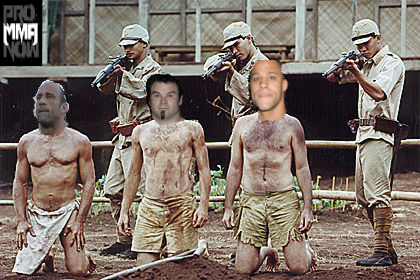 “Relentless” now, more than ever, seems an appropriate name for UFC 109. Multiple sources are reporting that Frank Trigg, Mark Coleman, and Tim Hague have all been cut by the UFC, following their losses at “UFC 109: Relentless” this past weekend.

Most people, most of all Frank “Twinkle Toes” Trigg, knew it was do or die for him as he was matched up against Matt Serra at UFC 109. Trigg was coming off a brutal first round knockout loss to Josh Koscheck at UFC 103 this past September, so he was already on thin ice. Trigg started the fight looking calm and collected, seemed to be moving well, and Compustrike has him landing six punches. One big overhand right by Serra changed it all, Trigg went down, Serra followed it up with a few more shots, and that was it for “Twinkle Toes.”

Trigg was ranked in the top ten for many years, and has had great success fighting outside the UFC. With a record of 19-8, only three of his losses have been outside the Ultimate Fighting Championship. Will the 37-year-old fighter go back to fighting on the regional circuit and possibly Japan? Time will tell.

Mark “The Hammer” Coleman returned to the Octagon at UFC 93 in January of last year against Mauricio “Shogun” Rua. Although, Coleman lost via TKO in the third round, it was an all out war that saw both fighters push themselves past the point of exhaustion.

Coleman was brought back six months later at UFC 100 to fight Stephan Bonnar. This is the fight that proved, according to UFC President Dana White, that “The Hammer” was back. He used his trademark ground and pound to go the distance with Bonnar, and got the unanimous decision.

After his win over Bonnar, a fighter who’s wrestling has a lot to be desired, Coleman got the bright idea he was now ready to face Randy “The Natural” Couture, one of the best wrestlers ever to compete in MMA. How Coleman made the jump in his mind from defeating Bonnar, to thinking he could compete with Couture, is any one’s guess.

He calls Dana White, they make the fight happen, and Couture proved to Coleman, even though they are about the same age, their skill set is light years apart, and it will never ever be any different. That is the cold hard truth. How does one call up a UFC Hall-of-Famer and fire him? (send an email?)

Tim “The Thrashing Machine” Hague arrived in the UFC in May 2009 with a win over Pat Barry via guillotine choke at UFC 109. Three months later he was knocked out by Todd Duffee at UFC 102. Then six months later at UFC 109, he loses a unanimous decision to Chris Tuchscherer.

“The Thrashing Machine” is going to be just fine. Unlike Trigg and Coleman, who are on the down slopes of their career, Hague is still in his twenties. He holds a record of 10-3, and only one of those losses is outside the UFC.  He will likely return to King of the Cage where he went 8-0, or move on to another organization. He is a talented guy that will surely be thrashing the competition for years to come.