Mixed martial arts needs great wrestlers. One might even say it is the life blood of our sport. It has long been thought of as the best base for any athlete transitioning into MMA. Pro MMA Now (www.prommanow.com) recently spoke to Team Thirsty member Shawn Bunch about his heavily decorated wrestling career, as well as when, and if, he was going to make the move to MMA.

PRO MMA NOW: Shawn can you tell us about your wrestling background, what schools you have wrestled for, where you are now, and some of the titles you have held?
SHAWN BUNCH: I started wrestling when I was 8-years-old, my mom signed me up because I was always running around the house beating up my sister and my brother. I went to High-school in Kansas and I was a two-time state champ and four-time finalist. I went to College at Edinboro University. I was a two-time All-American placing second and third. I graduated in ’06 then moved to the Olympic Training Center for a year-and-a-half, up until after the Beijing Olympics. I won the Pan Ams in ’08, then I won the US Nationals, but I was runner up in the Olympic Trials, and was one match from making the Olympic team. Now I am training in Columbus, Ohio at the Ohio Regional Training Center. Since living there, I was runner up in the ’09 Nationals, and I won the ’09 World Team Trials. I am on the World Team now. 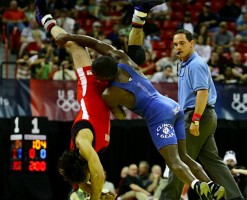 PRO MMA NOW: What was the hardest thing about transitioning from Folkstyle to Freestyle?
SHAWN BUNCH: I always thought I was better in Freestyle and with the new changes in the style it caters more to my style of wrestling which is on my feet… so the transition was good for me.

PRO MMA NOW: How often do you train at the Olympic Training Center?
SHAWN BUNCH: Well I go their once a month for about one-to-two weeks at a time for the training camps that we have here.

PRO MMA NOW: Do you think in the future, world level wrestlers will compete in both MMA and wrestling like Ben Askren?
SHAWN BUNCH: Yes, I do think they will, just like Joe Warren is doing now too. Being able to make a decent pay day and still do what u love is a good thing.

PRO MMA NOW: Do you think the exploits of King Mo, Daniel Cormier, and Askren will bring more MMA fans to wrestling?
SHAWN BUNCH: Yes, as these guys get bigger in the sport and fans see that they came from a wrestling back ground, they will get more into the sport. MMA is a growing sport with a lot of fans and this will also get fans to get their kids to wrestle knowing that this is a good base for fighting. 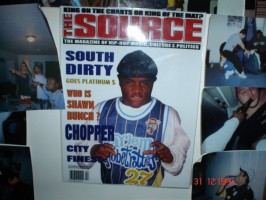 PRO MMA NOW: Do you think the MMA community has a responsibility to support wrestling? If so how?
SHAWN BUNCH: I think they should know that Wrestling is a good base for the sport, but I don’t think they are responsible for supporting wrestling though.

PRO MMA NOW: How much longer do you want to keep wrestling competitively and what are your future plans? Do you plan to make the jump to MMA, if so when?
SHAWN BUNCH: Well I am taking wresting year by year now. I don’t really have a date of when I will stop wrestling though, and as far as MMA, I am just waiting for the right time and opportunity for me to start my MMA career.

PRO MMA NOW: As a high level wrestler, what is the appeal for you going into MMA – and where do you see yourself, say, five years down the road?
SHAWN BUNCH: The appeal for MMA to me, is being able to make a decent amount of pay day and getting the worldwide exposure doing this. In five years I see myself living good and feeling good, with world titles in MMA, wrestling, and whatever else that I decide to take up.

PRO MMA NOW: If you come into MMA, what weight class would you compete at and what organization would you like to fight in? Also, what fighter out there would be fun for you to fight one day?
SHAWN BUNCH: 135, 145, 63kg Dream, Bellator, WEC, which ever organization gives me the best offer that I think is good for me. I would like to fight Miguel Torez, Bibiano Fernandez, Chan Sung Jung, Kanahera, Jose Aldo; there are a lot of guys that I would love to fight. 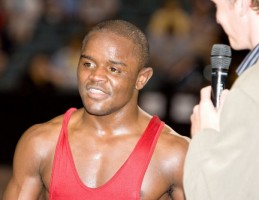 PRO MMA NOW: Who are some of the MMA guys you like to watch fight? And who are some wrestlers we should keep an eye out for who are making the move to MMA too?
SHAWN BUNCH: I like to watch my Team Thirsty Boys: King Mo, Daniel 2x Cormier, Rashad Evans, LC Davis, also, ex-college teammate Josh Kosheck, Jose Aldo, Anderson Silva. Wrestlers to keep and eye on are Henry Cejudo, Steve Mocco, Kyle Cerminera, Raymond Jordan.

PRO MMA NOW: Thank you Shawn for speaking with us at PRO MMA NOW (www.prommanow.com), is there anyone you want to thank, or any shout outs you want to give?
SHAWN BUNCH: I would like to thank my Mom, Dad, brother, and sister, for believing in my dreams and was there for me when I needed them. Give a shout out to Team Thirsty, my boy the Rib Killer, Don Dejaun, Creepy C, Thirsty B, J-Reed, James Jr., Santana, Jair the thirsty Panamanian Prince, my cousin Alvin, all my babies on my roster, and all the Family in the 561 Palm Beach County.