Jeremy Stephens tenure in the UFC is impressive and he is currently riding a three fight win streak which started back in September of last year. He appeared on UFC tonight with Daniel Cormier and Kenny Florian to discuss it. Check it out…

We all assumed it was coming. Mario Yamasaki has a history of making Dana White and fans mad with some very questionable decisions either with stoppages coming too quick or worse, too late. Rather than in going to a lengthy discussion on all of the mistakes Yamasaki has made we will let Dana do the talking. 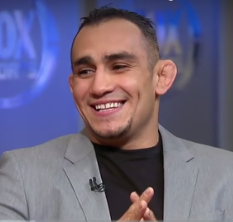 Speaking on UFC Tonight this week top lightweight contender Tony Ferguson was asked if he knew Khabib Nurmagomedov was going to miss weight at UFC 209. “I didn’t have inside info,” Ferguson said. “I know my opponent. This is the third time I’ve had to read him. Before the weigh-ins, this dude already looked sucked up. … Read more

UFC President Dana White appeared on UFC Tonight Wednesday and delivered all sorts of tidbits. Like this one. Holly Holm will NOT be doing an immediate rematch with Ronda Rousey. She will fight someone else [we think Miesha Tate] before she and the Rowdy one square off again. White gave his thoughts on featherweight champ Conor … Read more

UFC bantamweight champion TJ Dillashaw will finally get to the asterisk from his title.  Well, he doesn’t really have an asterisk, but Dominick Cruz never really lost the title as champion since he had to relinquish it due to not being able to defend the title because of multiple injuries. The two will fight on … Read more