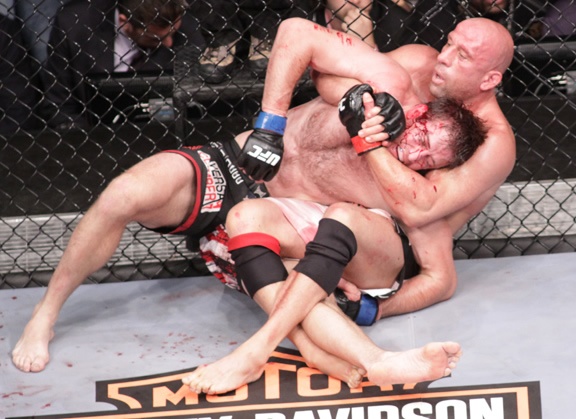 ProMMAnow.com talks with one of MMA’s legends, Mark “The Hammer” Coleman, about life after fighting, his fondest memory in the sport and what it would take to get him back inside the cage.

UFC heavyweight champion Brock Lesnar is in the best shape of his career heading into his UFC 121 title defense against Cain Velasquez and believes his MMA skills have yet to peak.

Pro MMA Now (www.prommanow.com) will provide live results and round-by-round commentary beginning at 7:15 p.m. ET (4:15 p.m. PT) for the preliminary card and 10 p.m. ET for the main card, which will be broadcast on pay-per-view. Immediately following tonight’s pay-per-view broadcast, you can watch the UFC 110 post-fight press conference LIVE in ProMMAnow.com’s UFC … Read more

With the UFC putting on an ambitious number of shows there were fears that their product would become diluted. Yes, there have been some instances like UFC 108 and 109 when fans have been upset about the quality of a card. However, when MMA’s biggest promotion wants to put on a huge card they pull out all the stops.

In 2009 the UFC did just that for their 100th numbered card – UFC 100. Despite the fact that it was not a real milestone, the promotion still hosted several memorable fights. The contests not only looked great on paper, but also entertained the MMA viewing public.

The card featured two title fights, a showdown between coaches from “The Ultimate Fighter” and the debut of a foreign superstar. In the end it lived up to the hype and provided enough excited to be named the ProMMA.info Card of 2009.

(IRVINE, CA) – Wanderlei “The Axe Murderer” Silva has signed a sponsorship deal with Silver Star Casting Company for a clothing collection that will include a UFC 110 signature walkout tee for Spring 2010.

With the majority of his fights ending in knockouts or referee stoppage, Silva’s ruthless, street-fighting style has earned him the nickname “Axe Murderer” – a moniker and image that sits well with the edginess of the Silver Star brand.

“Silver Star is honored to be working with one of the most aggressive fighters in the sport,” says Silver Star president and CEO, Luke Burrett. “Wanderlei is a force to be reckoned with and always delivers fans an adrenaline -pumping fight.”

Never one to be outdone, especially since Strikeforce just finished signing Fedor Emelianenko, the UFC unleashed the big guns, and aired a replay of “UFC 100: Lesnar vs. Mir 2” (originally aired July 11 on pay-per-view) free on Spike TV to counter-program Showtime’s “Strikeforce: Carano vs. Cyborg.”

It was a replay of UFC 100 in the red corner vs. Strikeforce in the blue corner.  Who do you think won?

After an abrupt ending to their 17 month partnership with Setanta Sports in June, the UFC has officially paired up with ESPN UK to air live events in the United Kingdom.

Launching on both Sky and Virgin platforms, ESPN UK will begin airing UFC events on August 8 with “UFC 101: Declaration.” They will also be broadcasting UFC Fight Night events as well as UFC Unleashed on Thursday nights.

With the first month being offered for free, viewers in the UK and Ireland will be able to watch UFC 101 and UFC 102 free of charge.

Frank Mir hates Brock Lesnar. That is fairly evident. He believes Brock broke some unspoken ethical “code” that martial artists are supposed to live by after his win at UFC 100.

For some reason this “code” excuses Mir from repeatedly degrading Lesnar in interview after interview since their bout. Surely, Mir would chalk all of it up to “hyping” up a potential rematch or finding another excuse why it is OK for him to talk endless smack about the champ, but when Lesnar celebrates his victory with a little “rubbing it in the face” of Frank Mir, then all the sudden he is the devil incarnate.

Georges St. Pierre once again showed everyone why he is the UFC Welterweight Champion by dominating Thiago “Pitbull” Alves with a unanimous decision victory at UFC 100. Many believed Alves, with his size, strength, and striking ability, would be the fighter to stop GSP in his tracks.

Alves recently talked to the Brazilian magazine Tatame about why he was not able to put a stop to St. Pierre’s reign. “What surprised me was that I couldn’t find the guy… I did a great strategy, but every time I tried to catch him he moved away,” said Alves.

MMA Live looks back at UFC 100 and the controversy surrounding Brock Lesnar’s post-fight antics. Also Shane Carwin joins the show to share his thoughts on a possible Title shot and his upcoming fight against Cain Valasquez. Plus, a DREAM.10 preview with Jake Rossen.