The UFC San Antonio weigh-ins are underway and you can watch it go down, and then the replay shortly after, in the video below.

UFC Fight Night 44 takes place this evening from the AT&T Center in San Antonio, Texas, and is headlined with a featherweight showdown between Cub Swanson and Jeremy Stephens. Swanson has won his last five in a row, while Stephens has won his last three. Another impressive victory for Swanson here could put him right in the mix for a title … Read more 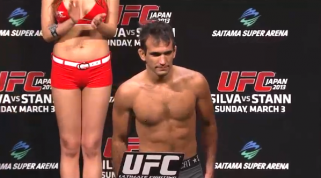 UFC officials have announced a bout for the upcoming UFC Fight Night event that’s set for June 28 at the AT&T Center in San Antonio, Texas. Rani Yahya and Johnny Bedford will meet in a rematch of their bout from UFC Fight Night 39 last week. The original bout ended in a no contest after the referee called a stop to the bout just 39 seconds into the fight after an accidental clash of heads.

SAN ANTONIO, Texas (July 15, 2010) — For the second time in three months, Bellator Fighting Championships will bring its action-packed, nationally televised brand of mixed martial arts to the historic Majestic Theater in downtown San Antonio on Thursday, Sept. 2nd. Tickets for the event go on sale at 10 a.m. CDT Friday at all … Read more

Event will be broadcast to virtually every home in the U.S. via NBC, FOX Sports Net, Telemundo and mun2 CHICAGO, Ill. (April 30, 2010) — Bellator Fighting Championships, the fist-of-its-kind tournament-style mixed martial arts promotion, will make its second 2010 stop in the Lone Star State next month when it comes to the Majestic Theatre … Read more

The fighters for Saturday’s “WEC 43: Cerrone vs. Henderson” to be held at the AT&T Center weighed-in this evening in San Antonio, Texas. Headliners Donald Cerrone and Benson Henderson both hit their 155 lbs. limit for their lightweight title fight.

Cerrone tipped the scales at 154.5 lbs. and Henderson was right on the mark at 155 lbs. Only one fighter, Mackens Semerzier, who is part of the preliminary card, failed to make weight on his first attempt. He originally weighed in at 147 lbs., but stepped on the scales again once the other fighters had finished and succeeded in making the 146 lbs. limit.

The WEC 43 main card will air live on Versus beginning at 9 p.m. CT and we will be providing live play-by-play commentary here at PROMMA.INFO.

“WEC 43: Cerrone vs. Henderson” was originally scheduled to take place Sept. 2 at the Covelli Center in Youngstown, Ohio but was postponed due to an injury to main event fighter Ben Henderson. The event will now take place Oct. 10 at the 18,000 seat AT&T center in San Antonio, Texas WEC officials announced on Friday.

The WEC released a statement just a week before their first venture into Ohio that the show would be rescheduled due to the undisclosed injury to Henderson. Shortly afterwards, it was made public the show would take place on Oct. 10, but whether or not it would be at the same location was left for speculation.

The Versus network which carries all the WEC shows had Oct. 10 available but the arena in Youngstown was booked already, thus prompting the move to San Antonio.

The UFC made it’s first appearance in the Lonestar State in April of 2007 when they filled the Toyota center with 15,000 fans and set the live gate record.

If everything goes as planned, the UFC will return to Texas sometime during fall or winter of this year, this time in San Antonio. They have their eyes on the home of the Spurs at the AT&T Center or if they run into scheduling conflicts there, the UFC also mentioned Freeman Coliseum which is located next door as a possibility.

“San Antonio is very much on our radar,” said Marc Ratner, vice president of government and regulatory affairs for the UFC. “If we can make it work, it will happen.” Sometime between September and December are the dates the UFC is looking at.