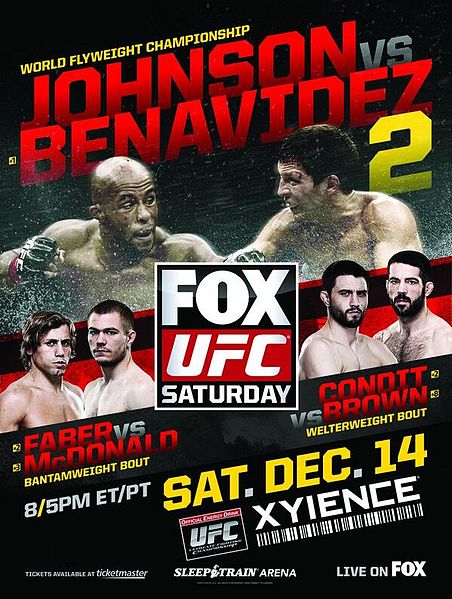 The cast of UFC on FOX 9 will gather today in Sacramento to speak with the media ahead of this Saturday’s event. Headliners Demetrious Johnson and Joseph Benavidez will be in attendance as well as Urijah Faber and Michael McDonald and more.

It will be the UFC’s first event anywhere in California since UFC 76: KNOCKOUT back in September 2007 when Keith Jardine won a split decision over Chuck Liddell in the main event at the Anaheim Center in Anaheim.

UFC 99: THE COMEBACK is the next UFC scheduled and it will take place in Cologne, Germany on June 13th. Following that, UFC 100: LESNAR vs. MIR 2 is set for July 11th at Mandalay Bay in Las Vegas, Nevada.

Marcus Davis, Chris Lytle, and Shogun after the jump…

Rashad fields questions from the press about his UFC Light Heavyweight Title victory over Forrest Griffin. Rashad says he is ready to take on all comers but admits it took him awhile to find his rhythm in this fight. He also gives a lot of credit to Forrest’s toughness.

Quinton “Rampage” Jackson talks about what winning this fight against Wanderlei Silva means to him. He responded to the critics who said he may not have been mentally ready for Wandy due to personal problems and his past losses to him. Rampage discusses the changes he made to get ready for this fight. He also … Read more

Frank Mir and Antonio Rodrigo Nogueira talk about what went down inside the Octagon at UFC 92. Mir talks about what winning this fight means to him and how he was able to defeat the legend. Big Nog admits that Mir was the better fighter and that he could not find his rhythm. Nog also … Read more

We begin with Forrest and Rashad.

by: jack Bratcher Forrest was noticeably missing as the UFC 86 post-fight presser bagan.  He was busy getting lots of stictches.  Dana was very pleased with the Jackson / Griffin fight and was also open to the idea of a rematch depending on how Rampage’s leg recoverss, how Forrest heals up and other considerations.  Rampage … Read more