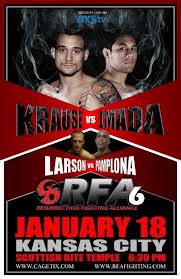 We have the Resurrection Fighting Alliance 6 quick results. James Krause took out Toby Imada in the main event via unanimous decision.

Weigh-ins for “Strikeforce: Fedor vs. Henderson” took place Friday in Hoffman Estates, Ill, in preparation for Saturday night’s fights at the Sears Centre which will air LIVE on Showtime at 10 p.m. ET/PT.

FAYETTEVILLE, N.C. – The fighter weigh-ins for “Shine Fights 3: Worlds Collide” took place Friday at the Big Apple Restaurant & Sports Pub in Fayetteville, N.C. The event is due to take place tonight at Crown Coliseum and will air live on Pay-Per-View beginning at 9:00 p.m. ET/6:00 PT. There is a 30 minute countdown … Read more

Miami, FL (USA): A bout between two of the most experienced lightweights on the Shine roster was finalized today, as UFC veteran Junior Assuncao (10-4 MMA, 1-0 Shine) will take on former PRIDE mainstay Luiz “The Joker” Azeredo (12-8 MMA, 0-0 Shine) in a stimulating bout at 155 pounds. The contest will be part of … Read more

Fight Will Take Place at “Worlds Collide: Mayorga vs. Thomas” Miami, FL (USA): Shine Fights is excited to announce the official signing of a bout between former Bodog Welterweight Champion Nick “The Goat” Thompson (38-12-1) and Brazilian veteran Eduardo Pamplona (12-2). The bout will take place on the main card at “Worlds Collide: Mayorga vs. … Read more

The weekend picks are back. I thought about letting this feature die, but after my horrible performance on the TUF 10 Finale (4-5 record, the only sub .500 of my career) I had to save face. This week we take a look at KSW 12, Jeff Monson‘s ability to fight in two places at once, Bitetti Combat and more. As always for UFC 107 picks check out the PROMMA.info staff picks coming out later this week.

KSW 12
Marcin Najman vs. Mariusz Pudzianowski
The five-time World’s Strongest Man champion will make his MMA debut this weekend. Standing in the way of a glorious debut is Marcin Najman, a boxer who once fought for the Polish Heavyweight boxing title. When the bout was first announced I had visions of Ray Mercer standing over Tim Sylvia’s limp body. However, I decided to check out Najman’s record. At the time he fought them, his opponents have a combined record of 53-218-7. Only two of his opponents had winning records, and he is 13-4. Pudzianowski should be able to push for a clinch and win by grinding out his opponent.
Pick = Mariusz Pudzianowski
Required Viewing
Pudzian training MMA (link)

In the season opener of the 2009 “M-1 Challenge Presented by Affliction” back in February in Tacoma, Washington, Team Brazil lost to Team USA West 3-2. This past weekend, Saturday May 9th, Team Brazil was back in action, fighting on their home turf against the 2008 defending M-1 Challenge Cup Champions Team Imperial in Sao Paulo, Brazil and PRO MMA (promma.info) has the results.

IFL Super Fight veteran Eduardo Pamplona (11-2) of Team Brazil defeated Bodog Fight veteran Erik Oganov (9-10) of Team Imperial in a majority decision that earned “Fight of the Night” honors. The next event of the 2009 season will be “M-1 Challenge: Fifth Edition” and is scheduled to take place on Friday, June 5 in Kansas City, MO with Team USA East returning to action against Finland.