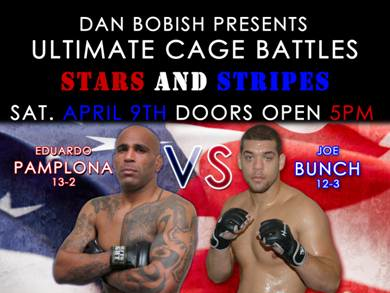 In the night’s main event, Black House product Eduardo Pamplona (fighting out of Sao Paulo, Brazil / 13-2; 3 KO, 2 sub) will take on Finney’s H.I.T. Squad member Joe Bunch (fighting out of Granite City, IL / 12-3; 4 KO, 3 sub) in a 178-pound catchweight bout. In addition to the main event, six more pro fights are set to take part of what will be the best event in Northeast Ohio this year.

McCall, who currently trains with Matt Hughes and Robbie Lawler at Finney’s H.I.T. Squad in Granite City, Illinois, has long been lauded as one of the top heavyweights in Ohio. A former champion in the NAAFS and UMMAXX organizations, McCall will be competing for the first time in more than a year when he steps into the UCB cage on April 9. The year away has allowed him to grow as a fighter while training at a world-class gym.

Although his record may not show it, Patrick Harman is one of the toughest heavyweights in the Midwest. Currently training with UFC veteran Todd Brown at Midwest Martial Arts in Osceola, Indiana, the 25-year-old saw his five-fight winning streak snapped when he lost a decision to Joe Galer nearly a year ago. Now back and better than ever, Harman plans on starting another winning streak with a victory over McCall.

A one-time Strikeforce veteran, Coleman is known for his quickly developing well-rounded skills. After growing up on the streets in Oklahoma, Coleman transitioned to mixed martial arts and quickly honed his natural talent to become a fast-rising star. A former gridiron star who became one of the original members of Northeast Ohio’s Strong Style Fight Team, Masterson has long been a staple in the Ohio MMA scene. Now looking to climb back into championship contention, the 28-year-old knows that a tough foe is standing in his way first.

Fists will be flying as lightweights Torrance “The Tyrant” Taylor (fighting out of Cleveland, OH / 9-7-1; 2 KO, 4 sub) and Kyle “Alley Cat” Baker (fighting out of Harrisonburg, VA / 9-4; 6 KO 1 sub) face off in a highly anticipated bout at 155 pounds. A decorated kickboxer and black belt in karate, Taylor is a game opponent for any fighter, as he has proved with victories over Jason Dent, Junior Assuncao, and Shonie Carter. Baker, 8-1 in his last nine fights with six first-round stoppages, is not afraid to trade punches either.

In another lightweight bout, two undefeated fighters that everyone has been talking about will square off. Wand Fight Team’s Maka Watson (fighting out of Las Vegas, NV / 6-0; 2 KO, 3 sub) will take on Black House prospect Justin “The American Kid” Lawrence (fighting out of Pacific, MO / 1-0). Originally from Hawaii, Watson now trains with MMA legend Wanderlei Silva and has earned all of his victories via stoppage. One of the top prospects out of Black House, Lawrence made his pro debut at Strikeforce in December and doesn’t plan on taking a step back. A former state champion wrestler in Missouri, six-time Golden Gloves champion, and two-time Diamond Gloves champion, the 20-year-old Lawrence is a certified future star in the sport.

In a highly anticipated welterweight bout, Tiawan Howard (fighting out of Cleveland, OH / 8-6; 3 KO, 5 sub) will return to UCB following his January submission victory over Eric Moon to take on Michigan’s Daron Cruickshank (fighting out of Wayne, MI / 6-2; 4 KO, 1 sub), one of the top prospects in the Midwest. A half brother of Torrance Taylor, Howard started his career at 7-3 before moving up in weight while still fighting tough opponents. All eight of his victories have come via stoppage, including five submissions for the well-known striker. A kickboxer with a background in wrestling, Cruickshank will be looking to bounce back from just the second loss of his career, when he fell to veteran Luis Palomino in February.

In the night’s opening pro bout, featherweights Josh “El Cabron” Tyler (fighting out of Mechanicsville, VA / 1-0; 1 sub) and Brett Ewing (fighting out of Dayton, OH / 1-0) will both look to notch a notable victory early in their career. Tyler, who trains out of Yamasaki Training Center in Virginia, is a former collegiate wrestler at Old Dominion University. After going 7-0 as an amateur, Tyler turned pro and earned a submission victory in his first fight. Ewing, who had been waiting to make his pro debut for nearly a year, debuted on March 26 and earned a hard-fought victory. He was one of the top amateur fighters in Ohio, going 10-0 before turning pro, and is a former three-time state wrestling qualifier.

In addition to seven pro fights and a dozen amateur fights, “Stars and Stripes” will feature a dozen amateur bouts for a whopping total of 19 fights! MMA legend Wanderlei Silva will be holding a seminar in conjunction with the event, and tickets for the seminar – which include a general admission fight ticket in addition to the three hour seminar – are on sale now for $100 at www.UltimateCageBattles.com. UCB also announces that groups will get special rates to the seminar, with a group of five receiving a 10% discount ($450 for five seminar tickets) and a group of 10 receiving a 20% discount ($800 for ten seminar tickets).

The complete pro lineup for “UCB: Stars and Stripes” is as follows: