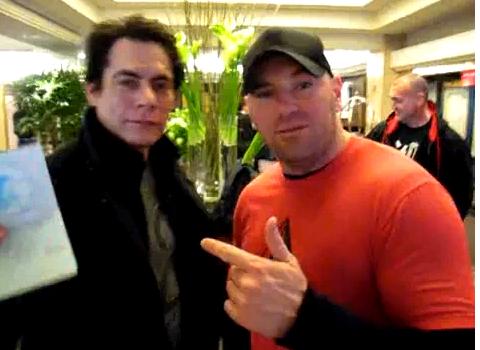 The first half of this video blog shows Dana and the gang leaving Canada. Dana tells a story about “Father Tom” stink bombing a plane by taking a poo in the bathroom. Next, we get a behind-the-scenes look at the UFC 111 pre-fight press conference at Radio City Music Hall on Wednesday. This is where … Read more

In his third video blog leading up to UFC 109, Matt “The Terror” Serra takes fans along on media day. However, first we have to pick up coach Ray Longo at his house. Longo takes us on a mini-tour of the house and introduces us to some great Italian Americans including Rocky Balboa. Then it’s … Read more

Here is this past week’s episode of The MMA Show with Mauro Ranallo. The show starts off with an interview with UFC President Dana White where he talks Abu Dhabi, UFC 112, and Brock Lesnar. White also gives his opinion on Fight NIght 20 and voices his displeasure on some of the judging. He doesn’t feel … Read more

Dana White gives his thoughts on all that took place at UFC 106. He says he was very impressed with “Lil Nog” and Josh Koscheck, and also says Phil Baroni will probably be back for another fight. White reveals that he and Koscheck have butted heads behind the scenes in the past. He also does … Read more

Fight Game, Round 1: NY Assemblyman on why he opposes MMA in New York

Jared Shaw, affectionately known as “Skala”, has finally surfaced after months of absence from the public eye. He recently gave an interview to another man who has been taking a little break as well, Ariel Helwani.

In this new interview, ‘Skala’ talks about his time with ELITE XC, his accomplishments with helping to jumpstart the careers of a few now well-known fighters and the things he would have like to have done differently, given the chance.

He has one major regret out of his time with ELITE XC and that is the fact he stood up screaming when Kimbo Slice got knocked out by Seth Petruzelli on national TV. Shaw said now when you ‘Google’ his name inevitably that picture comes up. As the Editor of PRO MMA (promma.info) I’m proud to say we contributed to the cause. In fact we even had a ‘picture slogan’ contest in honor of that very memorable moment in MMA history.