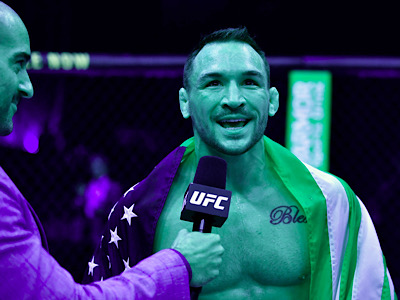 Michael Chandler was a breath of fresh air for the UFC lightweight division when he debuted in January of 2021. It was in a transitional period with the retirement of undefeated champ Khabib Nurmagomedov and the absence of a hungry version of Conor McGregor. There was star power but no new superstar. The division needed a new one and a new king.

it looked like Chandler was going to be it with his debut being a two and a half minute destruction of Dan Hooker. He would get his title shot and come up short despite a good showing and then lose again in a war with Justin Gaethje. So with cooling off after a hot start where does that leave Chandler?

He thinks it’s in a spot circling the belt. The problem is that there are plenty of sharks circling with him. Gaethje is next in line, Islam Makachev is surging, Beneil Dariush is making a run, Dustin Poirier is still there. As a matter of fact a Chandler vs Poirier bout should be made ASAP. That bout makes a lot of sense.

Here is what Michael Chandler had to say on ESPN’s DC & RC show about his situation:

I think everyone wants to see a rematch of myself and Charles Oliveira. They definitely want to see a rematch, Chapter 2 of the Fight of the Year against myself and Justin Gaethje. So, I’ve kind of put myself in a unique position where I could be one win away, and I get the nod to go out there and win the title by the end of 2022.

Chandler is dangerously close to Kelvin Gastelum and Darren Till territory. The guys who fans like to see scrap, put up a good fight, and then come up short. That is not a sustainable business model to say the least.