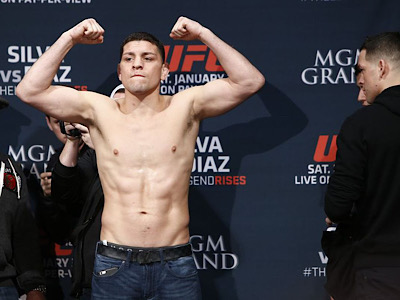 Jorge Masvidal may have beaten Nate Diaz for the BMF title but it was under questionable circumstances, kind of. The UFC 244 main event bout was stopped by a doctor between rounds 3 and 4 for damage above and below his eye.

Masvidal has been vocal about the dominance he showed in the three rounds and feels Nate was saved from being knocked out. Whether or not that’s true will never be known. They want to rematch each other but Dana White isn’t having it.

Masvidal was first rumored to be fighting Nick almost 5 years ago. They both don’t have any fear and have zero F’s to give so the bout was wanted by MMA fans. That would have been one hell of a fight but it went by the wayside and we got his little brother instead.

In a recent interview with Ariel Helwani we got to see the original Stockton slapper fired up and looking to pick a fight with Masvidal. Just check this out and revel in the total Nick Diaz experience. It’s amazing.

Game recognizes game. Check it out.