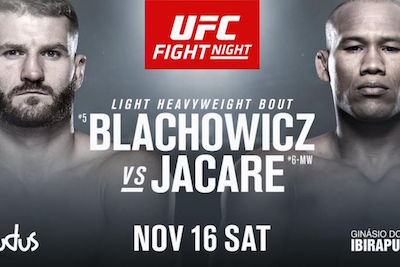 Fight Night 164 is headed back to Sao Paulo, Brazil on November 16th.

The card is loaded with talent and the main event is going to be exciting as all get-out. Even though Jacare Souza is going to be the hometown hero, he’s listed as the +180 underdog on the UFC Odds boards to Jan Blachowicz.

Jacare & the Jump in Weightclass

The Brazilian is coming off a decision loss to Jack Hermonsson, though at the tender young

age of 39, he’s proven that he is still a relevant contender in the fight game. But now he’s back on his home turf and the electricity in the Ginásio do Ibirapuera will be palpable.

It’s interesting to think that Ronaldo Souza is moving up from Middleweight to Light-Heavyweight after losing at 185. We’ve seen many fighters meet their doom after coming up in weight, think about Chris Weidman who jumped to Light-heavy and got brutally knocked out by Dominick Reyes. Luke Rockhold came up in weight to fight Jan Blachowicz and was also savagely destroyed in his light-heavyweight debut.

The love triangle here is also interesting. Weidman, lost to Jacare Souza before he made his jump. And the Polish light-heavyweight rung Rockhold’s bell. Both who are former middleweight champions. So, what makes a nearly 40-year-old Ronaldo Souza think that he’ll be able to successfully make this leap? Well, either way, the things I am mentioning right now are a big part of the reason that Jan Blachowicz is a -210 favorite in the fight.

The Polish fighter was on his way to fighting Jon Jones before he was knocked out by Santos in the final ‘leg of the race.’ He is a phenomenal striker that utilizes excellent boxing skills and heavy kicks to the body. He likes to set his opponents up with a stiff, heavy jab that steers them into his power hand. And on top of that, he’s a pretty darn good counter-puncher as well with great timing. Just ask Rockhold about that counter left hook that completely turned off the lights.

Jacare is going to have to take Blachowicz down to win this fight. I don’t see him winning by knockout or by points while standing. The Pole is going to attack continually with the jab and try to pick the Brazilian apart. He he can stuff Jacare’s takedowns, he’ll should win this fight. One could argue that Jacare beat Weidman with his fists, but Jan is bigger, stronger, and a much better boxer with heavier hands than Chris Weidman. So, in my opinion, Jacare has to get Jan down on the mat with enough time on the clock to go to work.

Jacare is a legendary BJJ practitioner who has bested some of the best Brazilian Jiu-Jitsu players in the world. Although Blachowicz does have nine submissions under his belt now and is a black belt in BJJ, he is not prepared to grapple with the likes of Jacare. That said, it will be extremely hard for Jacare to take Blachowicz down. Although he’s only around an inch shorter in height, he’s giving up a solid six inches in reach to the Polish fighter.

For this reason, I believe that Jan will be able to effectively control the distance and land heavy jabs to Jacare’s face all night long. After this fight, they might have to rename Jan Blachowicz as the former-middleweight slayer. I wouldn’t be surprised to see Jan’s jab silence the crowd in Sao Paulo. But Jacare will have stronger submissions being able to go up in weight instead of cut weight. The thing is simply getting inside of Blachowicz’s longer reach and heavy hands.

This one could be a fight for the ages. We all know that Souza is a warrior who can take some serious punishment. He is going to come into this fight and feed off of the home crowd energy and give it everything he’s got. No matter who wins, this is going to be a battle that you won’t want to miss.