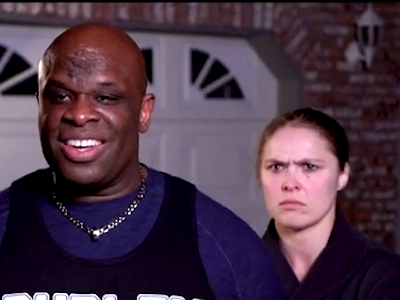 Sometimes things related to mixed martial arts pop-up that makes even my editor scratch his head.

Former UFC superstar turned WWE performer Ronda Rousey along with her husband, friends, and Devon Dudley released a spoof horror movie trailer, or at least what we hope is a spoof. In this trailer and we put that in quotes, Rousey and friends appear to be stalked and then attacked by killer wooden tables. It was hard to type that without laughing.

Obviously the joke stems from Devon and Bubba Ray Dudley’s fondness of putting their opponents through tables. It’s become an expected part of all of their matches and the crowds often calls for them to bring them out before the bell even rings.

If this is real it very well could outshine Troll 2 or The Room as a bad movie. Watch and decide for yourself.