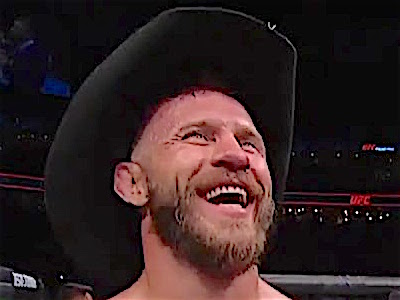 Following his armbar submission victory over Mike Perry back in November, Donald “Cowboy” Cerrone will make his return to the octagon on Jan. 19 when he faces Alexander Hernandez on the UFC’s ESPN+ debut card in Brooklyn. Cerrone is moving from welterweight back to lightweight for this matchup and the two will headline the prelims on ESPN.

Cerrone had a very respectable run at welterweight over the past couple years but hasn’t fought at 155-pounds since his TKO loss to Rafael dos Anjos for the lightweight championship in Dec. 2015. Prior to that title shot loss though, Cerrone had racked up eight straight wins at lightweight and had earned eight performance bonus awards in the division since his UFC debut in 2011. “Cowboy” would make a solid pick on the Draftkings Sportsbook App as we are predicting his win in this match.

In stark contrast to Cerrone’s well established history, Hernandez has only had two fights inside the octagon. He scored a “performance of the night” bonus for his 42-second KO victory over Beneil Dariush at UFC 222 last March. And he most recently earned a unanimous decision over Olivier Aubin-Mercier this past July.

Aside from that, Hernandez has never won a major title (He was the Hero FC lightweight champ). And he had a single fight inside the RFA cage in 2016 which he won by submission. Hernandez is 26-years-old, a BJJ brown belt, and has an overall MMA record of 10-1.

There’s no doubt Hernandez is talented but neither opponent he has faced so far inside the octagon has the pedigree of Donald Cerrone. Not even close. So why is he being considered the betting odds favorite going into the UFC on ESPN+1 card? Oddsmakers currently have the betting odds at: Hernandez -185 vs. Cerrone +160. Some even have Hernandez as high a favorite at -220 and Cerrone as low an underdog as +165.

While it is true Cerrone is 2-4 in his last six fights, those fights were at 170 pounds and don’t necessarily reflect well on what he had previously accomplished in the 155-pound division. In addition to that, one has to take into account Cerrone’s lifestyle and fighting nature. Sometimes “The Cowboy” was out to pasture in the past with his partying and rambling ways, but more often than not still got it done in the cage.

However, now with the birth of his son and what seems like a new perspective on things, the odds of Cowboy getting beat by a 2-0 UFC guy just doesn’t seem that likely. If we were the betting type, our money would not be against Cowboy on this one.

See if you agree though after watching this highlight reel of Alexander Hernandez: