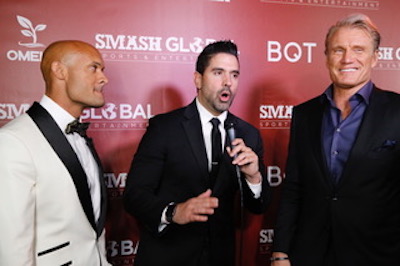 Hey now get the show on because on December 13, 2018, in Hollywood, Los Angeles, Smash Global broke the mold by honoring four world renowned and distinguished heroic personalities who as shooting stars have all made a significant impact in the world of the combative arts community.

SMASH Global VIII – Night of Champions was not only a night of celebrating its stars among its fights, but its event was also planned as a charitable event, which benefited its anti-bullying campaign. Charity events usually serve a multitude of purposes in raising awareness and funds for its cause and campaign. Recent emerging MMA trends show that the sport’s audiences are a responsive culture who are willing to give back to its organization in making a fighting difference.

Smash Global believes that when adults respond quickly to bullying behavior they send the message that it is not acceptable, but when stars and professional fighters as heroes challenge and fight bullying, its signification sends a fighting message that bullying is no longer tolerated. Research shows that safe zones can be enforced in one’s own community when its individuals are collectively mobilized in SMASHING bullying behavior and as a movement building a safer community for all of us.

The benevolent cause was marketed through its hashtag sourced as #SMASHBULLYING. Smash Global got its game on by honoring its allstars at the event where its event recognition was presented to Hollywood veteran actor and blackbelt holder Dolph Lundgren who was selected as its first honoree. The star of Rocky IV cast as Drago was recently featured as the nemesis supporting lead actor of Aquaman with his successful comeback-acting career and its multimillion-dollar feature film release.  At age seven, Lundgren began his  “I must break you” disciplined pursuit of the combative arts participating in judo. By there age of 10 Lundgren focused on Kyokushin karate where he specialized in its combative form and developed his karate skills in attaining the rank of 2nd degree black belt in Kyokushin in 1978.

Smash Global continued on with its evening to celebrate its many heroes including Brooklyn bodybuilder and actor of the original Incredible Hulk, Lou Ferrigno. Also, World Championship boxer “Sugar” Shane Mosley and actor of the Wrestler Mickey Rourke all received lifetime achievement awards, which was presented intermittently during the matches at the SMASH VIII world wide global event. All stars were selected as today’s modern heroes because each star has journeyed through life’s challenging trials and has shown to overcome great adversity.

The Hero with a Thousand Faces authored by Joseph Campbell is a literary classic which explores the narratives of normal day-to-day people who become mythic heroes in life and in literature. Campbell summarizes its mono-myth through its definition that a hero is one who dares to venture forth from the world of the common layman journeying onward to become its modern day superman. Campbell summarized its venture “The Hero’s Journey” begins in the ordinary world from which he must depart when he receives a great call to adventure. With the help of a mentor, the hero will cross a guarded threshold leading him to a supernatural world where familiar laws and order never apply. There, the hero will embark on a road of trials, where he is tested along the way becoming a hero or face doom through the process.

Heroic is the given reason why  SMASH Global was successful in its featured event and  business model which is founded on four heroic core principle and tenets: Professional mixed martial arts is the most exciting form of entertainment and the future of all combat sports, networking is the single most important tool for creating new business opportunities, honoring select individuals like its stars who have made a significant impact in the world of combative arts, and finally supporting a true cause like its anti-bully campaign that gives back to the underserved and the so less fortunate.

SMASH Global was produced and led by a visionary active fighter named Steve Orosco who holds an MBA degree. Through insight and market analysis Steve Orosco identified an opportunity to raise the level of the sport of MMA and entertainment as a form through his curatorial initiative in proposing and directing a collection of exclusive fight meets cultural events for a premium high-end clientele as an art form. With professional MMA as the cage and a black-tie gala including precious memorabilia and wares auctioned off as the backdrop stage, SMASH Global honored the very best in the combative arts community while raising benevolent funds and awareness for its charitable cause.

Finally what would an event be without a fight, Smash Global showcased live contested MMA fights which were sanctioned by the California State Athletic Commission and held in a full-sized 24’ x 24’ professional cage. SMASH Global crowned its first ever set of MMA World Champions where its evening showcased competitive bouts and featured fighters who traveled across the globe from distant international nations like  Trinidad, Brazil, Ukraine, Russia, Japan and USA to fight for the cause.

All photos by: Joey Krebs (Phantom Street Artist) for ProMMAnow.com

All photos by: Joey Krebs (Phantom Street Artist) for ProMMAnow.com