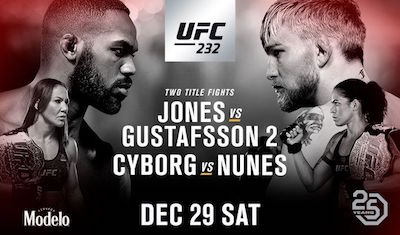 This is not helping your cause JJ. For the love of God it’s happening again. Jon Jones just got off his suspension for a failed drug test and an ‘atypical’ drug test has caused his return light heavyweight championship bout with Alexander Gustafsson at UFC 232 to be moved to another state entirely with one week to go.

The test showed very, very small traces of the same substance he received the above mentioned suspension for. According to the UFC it is something called ‘pulsing’ which would be like an earthquake aftershock of old PED’S in the body. With Jon’s history of PED and drug usage and even if it is ‘pulsing’ the court of public opinion will condemn him maybe for good this time.

The aftermath of this test is that the UFC 232 event has been moved to California from Las Vegas with one week to go. Basically he just screwed a lot of fans who had made their travel arrangements and spent hard earned money to schedule them in advance.

Jon, what are you doing man?