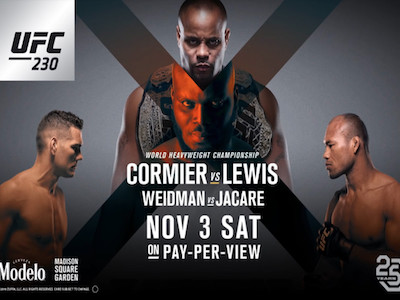 The heavyweight title is on the line in New York City Saturday night, Nov. 3, as champion Daniel Cormier defends his belt against knockout artist Derrick “The Black Beast” Lewis in the UFC 230 main event. In the co-main event top middleweight contenders Chris Weidman and Ronaldo “Jacare” Souza battle it out for a potential next shot at the 185-pound belt.

In addition to the main and co-main event attractions, the UFC 230 pay-per-view main card will also include a series of middleweight matchups with David Branch vs. Jared Cannonier, Karl Roberson vs. Jack Marshman, and Derek Brunson vs. Israel Adesanya.