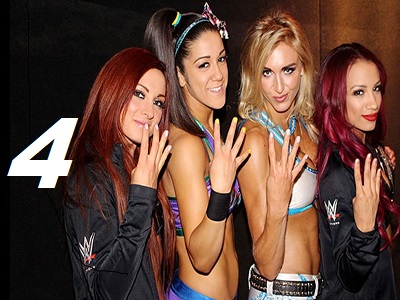 There have been so many – too many let’s be truthful here – versions of the Four Horsemen in NWA/WCW over the years. Ric Flair, Ole Anderson, Arn Anderson, and Tully Blanchard are considered the originals with other members like Sid Vicious, Barry Windham, Steve McMichael, and even Paul Roma joining the ranks. The stable name and reputation became so iconic that there were copycats everywhere – even in women’s MMA.

Ronda Rousey considers herself a member of MMA’s four horsewomen along with Jessamyn Duke, NXT women’s champ Shayna Bazler, and Marina Shafir. The group was a thing before WWE started snatching the former UFC fighters up but with WWE having their own version in place consisting of Charlotte Flair, Sasha Banks, Bayley and Becky Lynch we now have a potential big money match on the horizon.

Duke and Shafir are green and growing in NXT while Bazler defends her NXT title and Ronda tears up the main roster. It isn’t surprising that WWE is holding this match back right now because they get one shot at this feud. If the first match is solid and the crowd is in to it they will probably run this program for a year at minimum. With women’s wrestling growing in popularity things are looking up for the division so much so that a legitimate four horsewomen stable is getting fans excited. We are too.

The match is rumored to go down at Survivor Series in November.