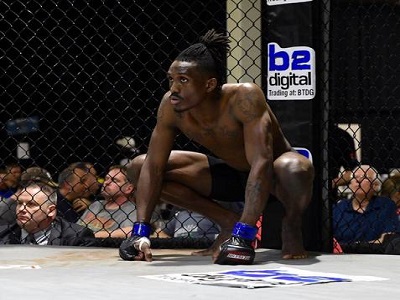 Quinton “Q” Parks is one of the best welterweights to never compete in one of the major league organizations. At 8-2 it would seem like a no brainer for one of them to pick the prospect up. He’s marketable and has the largest measured wingspan of a welterweight in MMA history, or so the story goes. Q dwarfs me and I’m 6 feet tall which makes his competing at 170 pounds even more amazing and appealing to bookers. Someone needs to contact Dana White ASAP.

Saturday at Hardrock MMA 100 we got to see just how tough Parks is. He defeated Reggie Merriweather by decision after three rounds of grueling action. Reggie is a veteran of over 25 fights making the win even more of a statement that Parks is ready for the big time. Feelers are out there with the big organizations but for right now it appears that Q will have to remain one of the best fighters to never compete in the UFC.

Maybe we can get him on a season of The Ultimate Fighter? Dana White where you at?