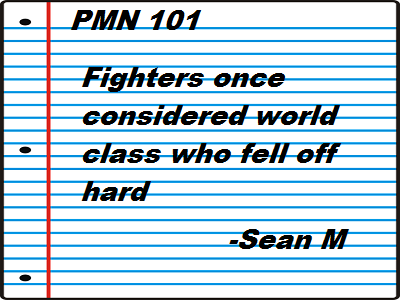 There have been some great fighters who never wore a belt. They were once considered top tier and then something happened which sent them in to a spiral. The qualifiers for a fighter to make this list are simple. They were never undisputed champion and they had at least one title shot or title eliminator. Other factors taken in to consideration are things like accomplishments and buzz before coming to the UFC, win streaks, and UFC performances.

This is part 1 of a list of fighters that were once riding high and then crashed hard.

Miller was a machine when he started in the UFC going 11-3 from 2008-2012. Flash forward to 2018 where he is 4-8 in his latest run and is currently on a four fight losing streak. Jim was considered the heir apparent to the lightweight throne for a brief moment until Nate Diaz squashed his dreams with a submission in the second round in the main event of a UFC on FOX event in 2012. It was Jim’s only title eliminator bout and he was never the same after the loss to Mr. Diaz.

Alves actually got a title shot during his initial explosion on to the scene but came up short. Since 2009 he’s gone 5-7 and missed weight twice during the stretch.  In his last four he has gone 1-3 with one of those losses coming to the above mentioned Jim Miller. Making that loss even more devastating was the fact that it was his lightweight debut – and he missed weight – by coming in 7.6 freaking pounds above the 155 pound limit. Sheesh.

Carlos is on this list because he was an interim champion of the welterweight division which means he was the undisputed #1 contender. So after capturing the interim belt by defeating Nick Diaz he went 2-7 and never lived up to the potential many fans saw in him. Condit is on an 0-4 skid but due to his name recognition the UFC will try to retain him to potentially elevate up and coming talent.

Before anyone blasts me for including him let’s look at the frame of reference for consideration. Joe was the winner of The Ultimate Fighter season 2 and that was at a time when winning TUF meant something. He was 23-6 (official record) before his UFC debut and he was well known on the MMA circuit to hardcore fans before stepping foot in to The Octagon. After winning TUF 2 he lost to veteran Josh Neer which was forgivable and then ran off four straight before getting a shot at lightweight legend BJ Penn for the vacant lightweight title. After a bloody loss to Penn he went 5-9 and hasn’t competed again since 2016.

He was the TUF season 1 fighter you loved to hate. Josh’s wrestling was elite level during the UFC boom period and served him well during for much of his time there. Of his 28 total fights he had 25 of them in the UFC and for a while he seemed like he might capture the welterweight title. He went 8-2 in his first ten bouts which is pretty amazing even today so when he faced champion Georges St. Pierre for the belt at UFC 124 we all thought he might be the guy to end his reign. After losing to GSP he never seemed to recover and despite winning two more fights he has gone 0-6 with the last coming in the Bellator organization.